From the RuneScape Wiki, the wiki for all things RuneScape
Jump to: navigation, search
Harpoon (class 5)? (edit)

The harpoon (class 5) is made during the Stealing Creation minigame. It is made by using class 5 sacred clay on a creation kiln. it its used to gather sacred clay from pools more efficiently. the harpoon requires level 80 Fishing to wield and level 80 Crafting to make. This is the best harpoon currently available to make inside the Stealing Creation minigame, it is the most used by high levels or Skillers and is generally rare to find deposited as only a handful of the most skilled players can make these. Players tend to turn class 5 clay into arrows or runes because these are stackable and so require no trip to deposit every inventory. As such, to obtain one of these harpoons, it is recommended that you trade with another teammate or make one yourself. 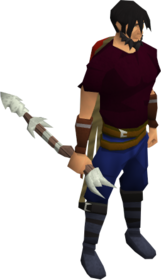 The update history project is a work-in-progress – not all updates to this topic may be covered below. See here for how to help out!
Retrieved from ‘https://runescape.wiki/w/Harpoon_(class_5)?oldid=28350448’
Categories:
Hidden categories: