From the RuneScape Wiki, the wiki for all things RuneScape
Jump to: navigation, search
For the items made during The Fremennik Trials, see Lyre and Enchanted lyre.
Harp? (edit) 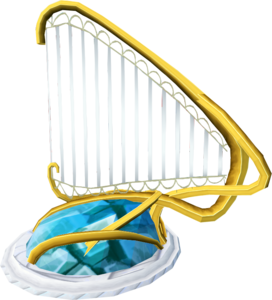 Playing the harps requires a minimum Crafting level of 75 and yields 80 Crafting experience and 1 harmonic dust for each successful note. A harp must be tuned periodically to continue producing dust. Higher Crafting levels increase the chance for successful notes. Tuning a harp grants 50 Construction experience for every 10% the harp is out of tune. Similar to mining the Seren stone, this is largely a low-attention-required activity and requires few clicks to continue playing the harp.

The Artisan's and Constructor's outfits can be worn to boost XP gained by playing and tuning harps, respectively, as well as the God chisels.

The harp becomes progressively out of tune as the player plays it, causing less frequent successful notes at every 10% interval. After the harp becomes entirely out of tune, the player is forced to stop playing entirely. There are chat indicators for every 10% the harp is out of tune. This is also shown by a swirl of black particles. If the game chat is filtered, then the indicators will show at 20%, 50%, 80% and 100%.

When the Voice of Seren is active in the Ithell district, harps are less likely to go out of tune, and yield an additional 20% Crafting experience per successful note and 20% additional Construction experience for tuning.