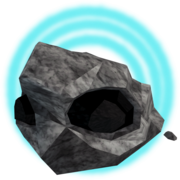 The harmonisation effect lasts a random amount of time from less than a minute to upwards of 45 minutes, with no apparent limit. The effect can last even after the Voice of Seren has changed away from the Trahaearn district, up to 5 minutes after the change, although the rocks will no longer have the 20% base experience boost and will no longer grant corrupted ore after the Voice of Seren has changed.