Ironman Mode and Hardcore Ironman Mode are account-types that encourage the player to be entirely self-sufficient. Both types of Ironman mode are locked out of most forms of interactions with other players such as trading, the Grand Exchange, most group minigames, PvP, Treasure Hunter and almost all other group activities. The modes were released on 13 October 2014. They are accessible only via a dropdown menu on the character creation screen. 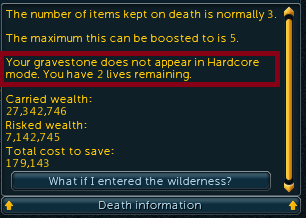 Two separate hiscores exist, one for each of the two types of ironman. When a hardcore ironman account gets deleted or downgraded, that account is not removed from the hardcore hiscores. Rather, their hiscores at the time of downgrading are kept, and their name is struck out with a tooltip message displaying how they died. 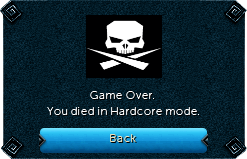 Deaths are not permanent in hardcore mode if they are counted as "safe death" in the regular game. In general, if the player would keep all of their items as a non-hardcore account, the death is safe for hardcore ironmen. This notably does not include the ring of death.

On 30 September 2014, around 130 players were selected to participate in the Ironman Mode Beta after receiving a message on 26 September, while others were also selected from certain competitions.

These accounts have usernames in the format "irontrial###" ranging from 1 to 130; however, all players were allowed to change their name.

When Ironman Mode was officially released, the beta accounts could still be played, but they would not appear on the Hiscores.