From the RuneScape Wiki, the wiki for all things RuneScape
Jump to navigation Jump to search
For other uses, see Harbinger (disambiguation).

Harbinger is a part of the Tales of the Arc miniquest series.

Speak to Navigator Jemi on Cyclosis and select the Harbinger miniquest option. Jemi tells you there may be a cure for Ekahi in Tuai Leit. Attempt to travel to Tuai Leit with Quartermaster Gully. En route, your ship will be harpooned by the Harbinger, lead by Captain Cora. Cora will board the ship and, after some dialogue, order her crew to fire at will. 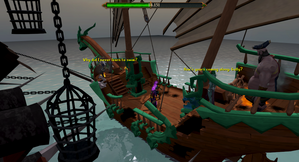 The cannon fire from the Harbinger will cause holes in your ship and cause damage within a 3-by-3 square. Repair the holes as they appear. After about 2 minutes, your crew will manage to detach the harpoons and escape, arriving on Tuai Leit. Your crew will speak to you upon arrival ending with the completion of the miniquest.

Harbinger is directly required for the following quests/miniquests:

This information has been compiled as part of the update history project. Some updates may not be included - see here for how to help out!
Retrieved from ‘https://runescape.wiki/w/Harbinger?oldid=35851373’
Categories:
Hidden categories: