The Hand in the Sand

The Hand in the Sand is an intermediate quest revolving around the mysterious discovery of a severed hand in a sand pit. It is notable for having lots of puns and jokes in its dialogue.

Bert the sandman in Yanille is in a spot of bother. A mysterious severed hand has appeared in his sand box. Help find out whose hand it is and, more to the point, how it got in Bert's sand box.

Travel to Yanille (use fairy ring code CIQ or Home Teleport spell with active Yanille lodestone to get there quickly), and talk to Bert. He can be found at the house next to the sand pit, east of the house portal. He tells you that he found a hand buried in the sand. Ask him why he hasn't told the authorities. He says the captain is drunk most of the time and asks for help. Agree to give him a hand, and Bert gives you the sandy hand. He suggests that the smelly hand will get the guard captain's attention.

Go to the sandpit located northwest of his house to fill the bucket for later use. Dash over to the Dragon Inn to the south and talk to the drunk Guard Captain. Give him a beer, and he takes a gulp and then asks what you want. Tell him about the hand Bert found. Wade through a rambling conversation with the captain and then give him the hand. He drops it in his beer — turning it into a beer-soaked hand — gives it back, and suggests you go talk to the wizards.

Go to the Wizards' Guild (east of the inn), and ring the bell to have Zavistic Rarve come out. If you already have access to the Guild then you can go find him upstairs. Talk to him about the hand, and ask if all his wizards are accounted for. After examining the hand, he tells you that this is the hand of Clarence, one of his apprentices. He asks you to help and find out why Bert's been working long hours.

Return to Bert's home, and talk to him again. He tells you he works for Sandy's Sand Corp, based in Brimhaven. He gives you a copy of his schedule and tells you that it hasn't changed recently—or so he thinks. Head to Sandy in Brimhaven. A quick way to get there is the Karamja lodestone and walk north. Sandy is located in the office just north-west of the Dead Man's Chest bar and south-east of ScarFace Pete's mansion.

Sandy's office is north-west of the of bar and south-east of the mansion.

Talk to him first if you want — he acts a bit brusque if you do — but you don't need to. Search Sandy's desk in the office to get Sandy's rota. Read it, and compare it to Bert's rota to see that Bert has indeed been working longer hours. While you're there, pickpocket Sandy. It may take multiple attempts before you find a small amount of sand in his pocket. Keep it, because it will become important later on in the quest, when you need to speak with Betty.

To tell the truth[edit | edit source] 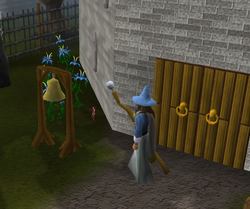 Zavistic teleports you to Port Sarim.

Make your way back to Bert in Yanille, and talk to him. Tell him his hours did indeed change a week ago, but Bert has no memory of it. He wonders if the wizards at the guild might be responsible for his memory loss and mentions a scroll that appeared a week ago. You ask if you can take a look at the scroll. It appears normal, but do not throw it out. If you brought a bucket instead of a bucket of sand, fill it at the sand pit.

Head back to the Wizards Guild, talk to Zavistic Rarve, and show him the scroll. Rarve tells you the scroll is used in a mind-altering spell. He gives you a magical scrying orb, and tells you to get some truth serum from Betty found at the magic shop in north west Port Sarim. You will then be ready to ask Sandy a few questions.

Grab a vial, redberries, whiteberries, and a (bullseye) lantern lens. Either make your own way to Betty's Magic Emporium in Port Sarim or take the items plus a second empty vial back to Zavistic Rarve and he will teleport you directly to Betty's shop.

Talk to Betty and give her an empty vial. She gives you back a bottled water and instructs you how to make a rose-tinted lens. Add redberries to the water to make redberry juice, and then add white berries to make pink dye. Once made, use it on your lantern lens to craft a rose-tinted lens. Talk to Betty again. Then, stand in her open doorway and use your lens on her counter to make the truth serum.

Talk to Betty again, who says you need something personal from Sandy or else the serum won't work. You hand Betty the sand you found in Sandy's pocket, and she sprinkles it in the serum, which fizzes. She recommends you dilute the serum in something like tea or coffee or else bad things might happen, such as "bits might drop off." Betty can replace the truth serum if lost, but will require more sand to do so. 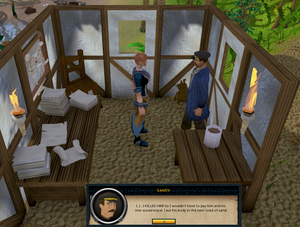 The cheapest way to reach Sandy would be to use the Karamja lodestone and walk north. Or talk to Captain Tobias or one of his young sailors on the Port Sarim docks to sail to Karamja for 30 coins, and then head west to Brimhaven. You can also charter directly to Brimhaven using the charter ship which is in the southernmost dock. This will cost 1600 coins or 800 with an activated ring of charos.

Use the serum on Sandy's Coffee Mug, and receive a message saying you need to distract him first. Talk to Sandy, and select one of the astonishing options. Use the serum on Sandy's Coffee Mug while he turns to look out the window. Activate your magical orb and talk to Sandy. He confesses that he changed Bert's schedule and bribed a wizard to put a spell on Bert so he would believe everything Sandy said. He then admits to killing the wizard so he wouldn't have to pay him and putting his body in a load of sand. 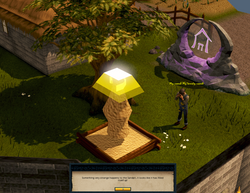 Return to Yanille, and talk again with Zavistic Rarve. You hand him the orb and watch as the recording is played back. Talk to him again, and tell him you've brought five earth runes and a bucket of sand. You see a short cutscene where he casts a spell on Bert's sandbox so that it will magically refill. He asks you to check the Entrana sandpit to see if you can find more bits of Clarence.

Talk to Mazion by the sand pit (it's just west of the dock), and ask if he has any body parts. He tells you he does and hands you the wizard's head. Return to Yanille one last time, talk to Zavistic Rarve, and give him the decapitated head. He confirms it's Clarence and says he will be buried today. He also tells you guards are on their way to arrest Sandy. 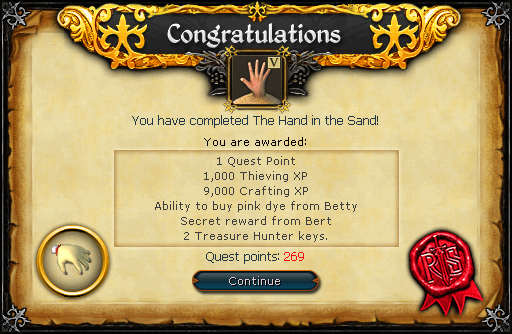 The Hand in the Sand is directly required for the following quests/miniquests: