From the RuneScape Wiki, the wiki for all things RuneScape
Jump to navigation Jump to search
The Old School RuneScape Wiki also has an article on: osrsw:Hallowvale
This article is about the historical region. For the quest, see The Darkness of Hallowvale. 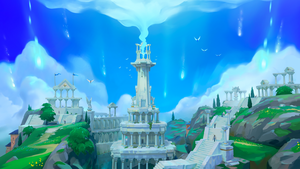 The ancient queendom of Hallowvale with the Everlight shining brightly.

Hallowvale or Hallowland[1][2] are ancient names referring to the region that would later be renamed Morytania. It was ruled by a Saradominist race from New Domina on Hallow known as the Icyene from as early as the Second Age of Gielinor, and eclipsed to the Vampyres during the Third Age, after which it was renamed Morytania. The kingdom was heavily wooded but arable, containing forests such as Humblethorn and Hallowglade. The capital was the large city that is currently known as Meiyerditch. The names Hallowvale and Hallowland are used somewhat interchangeably, Hallowvale seems to be the name of the actual main settlement in south-east Morytania and Hallowland being the whole land, but Hallowvale is still used to refer to the region as a whole.

Hallowvale was founded some time in the Second Age. It encompassed much of what is now south-eastern Morytania, with a small portion of the north-western side, containing the fortress of Kharyrll, falling under the control of the Empty Lord Zaros. For much of its history, it was ruled by the Icyene Queen Efaritay Hallow, and as a result most of the inhabitants of the land were Saradominist. The kingdom is suspected to have been named after the legendary queen.[3]

The end of Hallowvale came about around during the God Wars when Lord Drakan and his fellow vampyres invaded the region with the assistance of Zamorak. He captured Efaritay's husband Ascertes, and forced the Queen to surrender and attend him so that he may be saved. He then converted Hallowvale's cities into ghettos, where humans were farmed for their blood, and subjugated the northern parts to Blood tithes. By the modern day, due to the influence of the Vampyres, the formerly wooded region has become a large swamp, and renamed Morytania. 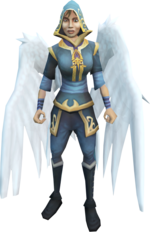 Hallowvale was a monarchy with Queen Efaritay ruling over it for its entire existence under Saradomin's authority. The monarchy was imported from New Domina, a floating settlement of the Icyene homeworld Hallow, and continued on Gielinor. Saradomin held the highest authority in the queendom and could ultimately overrule any decision, but given Efaritay's loyalty and Saradomin's respect, there are no examples of Saradomin taking authority on any other subject than war. Amongst the Icyene it was tradition that the ruling monarch married a military leader, and Queen Efaritay was expected to be wed to Archon Bable, however Efaritay came to Gielinor unwed, but eventually married the human Ascertes out of genuine love, with Saradomin's blessing.

Similiar to how the culture was imported, the language of Hallowvale was also the Icynic language spoken on Hallow. Icynic replaced the various languages of the people who were subjected to Saradominst rule, although the common tongue was exceptioned. During the God Wars Zarosians who converted to Saradominism also replaced their Infernal language with that of the Icyene. The Icynic language is almost forgotten with very few traces of it today. Saradomin's banishment at the end of the God Wars as well as the near-extinction of the Icyenes on Gielinor probably resulted in the decline of the langauge with the remaining Saradominists returning to the common tongue.

Before the reemergance of Everlight, there were preciously few pieces of Hallowvale art and architecture left. The most notable example is Efaritay's palace, which survived Drakan's invasion as well as the royal family's mausoleum at the Icyene graveyard. It was not till the Everlight rose from the ocean again and with that levelled large pieces of land, that had been submerged beneath the shallow waters east of Meiyerditch, that many lost buildings and artefacts of Hallowvale were rediscovered. A broad variety of artefacts was discovered including ceramics, marble sculptures, weapons, musical instruments, paintings and texts.

Hallowvale contained various places of culture including a theatre, a sports stadium and an acropolis. The acropolis of Everlight was home of academics, philosophers and poets. Public readings, talks, presentations and debates took place here.

The Dominion Games were a huge sporting event, whose original goal was to train the Icyene for battle through competition. Various disciplines were held including sparring, javelin and discus throwing and flight races. As the games were brought to Gielinor they were expanded with new disciplines to include the many new races that allied with Saradomin such as humans, centaurs and sirens. Foot races, archery and swimming were included to accommodate these races, but anyone who had the function to participate were allowed to. Even followers of allied gods such as Armadylean humans and aviantese were invited to participate as a gesture of goodwill.