From the RuneScape Wiki, the wiki for all things RuneScape
(Redirected from Halloween 2014)
Jump to: navigation, search
The Old School RuneScape Wiki also has an article on: osrsw:2014 Hallowe'en event

Death's Door was the 2014 Hallowe'en event released on 20 October 2014, which ran for a timespan of 2 weeks before it was removed on 3 November 2014. Players hunted spooky ghosts in Death's mansion to get a variety of rewards, including Ghost hunter equipment, a new Firemaking and Prayer ability, along with titles, emotes, and experience.

In addition to the event, a permanent Hallowe'en themed quest, Broken Home was also released on the following week. Completing the quest provided small bonuses in the event; namely increased damage to ghosts and a lower reward cost.

Muncher by the Burthorpe lodestone.

Players could start the event by heading to the Burthorpe lodestone and speaking to Muncher, Death's pet skeleton hellhound. After briefly attempting to understand his barks, you would discover that Death's house has been invaded by ghosts. After asking him to take you there, upon arrival you would see Death.

He explained that Melzar the Mad has attacked his house in order to try and control his domain and resurrect the dead of Crandor. Melzar was attacking the mansion using an army of Crandorian ghosts, which Death wanted you to remove using the proto pack; a powerful ghost-busting weapon developed by a friend of his. 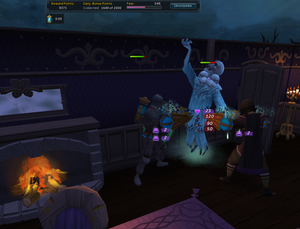 Banishing a ghost with the proto pack.

The aim of the event was to collect points by dismissing ghosts via the pack, which could then be spent on rewards. Killing stronger ghosts awarded more points than killing weaker ones, although they took longer to dismiss. Trophy points were the secondary currency only awarded once daily from exterminating demonic ghosts.

To find ghosts, one could either search furniture around the mansion, or aid other players and dismiss existing ghosts. Searching moving furniture would generally release stronger ghosts than stationary furniture. Ghosts could be found both on the ground and upper floor of the mansion, although only three ghosts can be active in a room at once. Tough, Terrifying, Vile, and Demonic ghosts heal a small amount of their health every few seconds while they are active, so it was beneficial not to leave them unattended.

There were eight different types of ghosts, which could be viewed in the Ghostpedia (accessible via the HUD).

When dismissed, ghosts could drop demonic traces, active ectoplasm, or an ectoplasmator. Additionally, a trophy point was given to the player upon contribution against a demonic ghost once per day. Demonic ghosts were only summoned by using five demonic traces, which were obtained from dismissing ghosts or looting chests. Active ectoplasm was used to supercharge the proto pack, enabling it to deal more damage towards ghosts.

When dismissing a ghost, there was a chance of obtaining two versions of the ectoplasmator - one being a normal drop, which could be picked up - and another 'ghostly' version, which could only be obtained by casting telekinetic grab. A player could differentiate between the two versions due to a message that displays when attempting to pick up a 'ghostly' version: That's right...it's a GHOST ectoplasmator! Woooooo!

While in the presence of ghosts (excluding bestial), and also while fighting them, players would gain fear. Upon reaching 100% fear, you would be scared to death and reappear next to Death, lose 20 reward points, and be reduced to 30% fear. The more powerful ghosts were capable of increasing your fear much faster, some possessing special attacks that increase it significantly.

To reduce fear, players could stand in the moonlight next to windows, reducing fear by 3% to 5% every tick. Ghosts could not be dismissed while standing in moonlight. Moonlight moved around the mansion from window to window. Also, fear was reduced by hugging a teddy, shining night lights, or eating chocolates; items which could all be obtained from chests within the mansion. 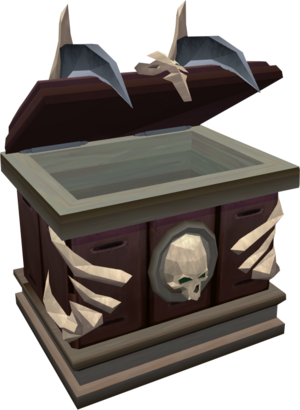 The chest only appeared for two minutes, and gave bones, big bones, dragon bones, sugar skulls, toffee apples, chocolates, teddies, night lights, demonic trace and active ectoplasm. A very lucky player potentially could end up finding an ectoplasmator (if they do not already own one) or ghostly essence from a chest.

Using crowded servers such as world 2 was recommended, as demonic ghosts frequently spawned in a short amount of time, allowing sufficient points to be accumulated. Fear was also gained minimally due to ghosts being banished quickly by a large amount of players. In this instance, it was more efficient for players to ignore fear and be scared to death; losing 20 points, rather than seek moonlight.

Rewards from chests were worthwhile for players in need of money, as the bones sold for a significant amount. All seasonal items will not be discontinued and may be banked, so players had the opportunity to store these as mementos.

Additionally, the proto pack cosmetic override was rewarded once 50 ghosts of any type were exterminated by the player. The ectoplasmator (and the ghostly essence used for upgrading it to an attuned ectoplasmator) were also randomly dropped by ghosts for members that did not already own either basic or attuned versions.

Up to 2,000 of the first reward points earned each day were doubled. The "Daily Bonus Points" counter displayed how many reward points have been doubled.

15,000 points was the maximum a player could hold at one time. Upon reaching 15,000 points the following message would be displayed: You have hit 15000 points. You cannot gain any more points but you can still help other people to dismiss ghosts.