From the RuneScape Wiki, the wiki for all things RuneScape
Jump to: navigation, search
The Old School RuneScape Wiki also has an article on: osrsw:Half-soulless

During the Underground Pass quest, the player receives a pair of gloves from a dwarf named Klank, appropriately called klank's gauntlets. Without the protection from the gauntlets, the half-soulless will bite players who search their cages, inflicting damage. Players search the cages as they must retrieve the dove skeleton in order to defeat Iban. Finding it might take a while, as there are many cages. 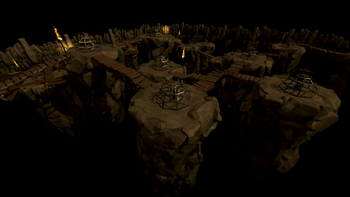 This information has been compiled as part of the update history project. Some updates may not be included - see here for how to help out!
Retrieved from ‘https://runescape.wiki/w/Half-soulless?oldid=35583585’
Categories:
Hidden categories: