From the RuneScape Wiki, the wiki for all things RuneScape
Jump to navigation Jump to search
The Old School RuneScape Wiki also has an article on: osrsw:Hairdresser

The Hairdresser can change a player's hairstyle. The hairdresser does not charge for new hairstyles. He is located in north-west Falador, near the mace shop. Alternatively, the player can click to the "Worn Equipment" tab, then "Customisation" and select the Avatar, then the Hairstyles option. There they can perform all the actions that the hairdresser can, in addition to being able to change hair colour, from anywhere in the world. The hairdresser is an excellent option to go to for changing appearance, because players may change their hair colours and styles however many times they wish for free. The chairs play no part in the process and are only aesthetic.

He is the only member of the World Hairdresser's Annual Meet to be met in game.[1] 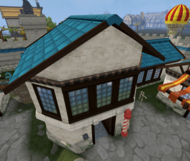 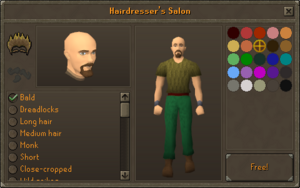 The menu in which characters change their hairstyle/colour