The player is able to retrieve the Enchanted key from Jorral, for 6,000 coins, after completing both the Making History and Meeting History treasure hunt miniquests and find the Guthix mjolnir, Saradomin mjolnir, and Zamorak mjolnir (in that order) again before the key disappears again back to Jorral. This cycle can be repeated as many times as you want as long as the player does not own any mjolnirs when buying the key from Jorral.

As its name implies, the Guthix mjolnir is affiliated with the god Guthix. It is tipped with a symbol associated with Guthix, the Tear of Guthix. 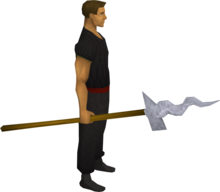 Unlike the Saradomin and Zamorak mjolnirs, the Guthix mjolnir does not give any special components.