From the RuneScape Wiki, the wiki for all things RuneScape
(Redirected from Gulega)
Jump to: navigation, search
For other uses, see Warped Gulega (disambiguation). 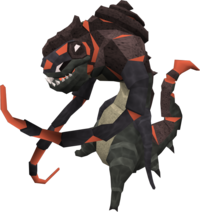 The Warped Gulega is a boss monster encountered on the Warped floors. It requires level 95 Dungeoneering to encounter under normal circumstances. However, one appears in Thok It To 'Em (saga) with 59 Dungeoneering.

It is a predatory creature from the Spirit Plane, heavily warped by the closeness to The Rift in the Warped floors.[1][2] Since the Gorajo have been fighting and hunting them for ages, they are able to inflict heavy damage on it with ease.[3] 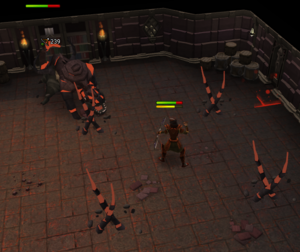 The Warped Gulega has no specific weakness, so it can be damaged equally by all attack styles. However, all damage done on the Gulega is heavily reduced by approximately 75%. Conversely, Gorajo combat familiars deal 4x their normal damage and hit constantly, so bringing a familiar, preferably a Bloodrager, is extremely useful and will significantly reduce the length of the fight. Upon entering the boss room, a player with a combat familiar will comment on the gulega:

The Warped Gulega uses all three combat styles which can be halved by the protection prayers and deflection curses. Its melee attack occurs when the Gulega plunges its tentacles into the floor which appear under a player. Therefore, its melee attack can hit players from a distance.

Its magic attack is a golden glowing orb that is launched at all players and familiars in the room.

Its ranged attack is a translucent brown bolt that resembles the effect of Soul Split that targets all players in the room.

The Gulega has a special attack where it smashes its arms directly into the ground, causing four tentacles to surround and close in on the player it is facing. If the player does not move from the square they were standing on within a few seconds, they will take typeless damage that reduces their life points to one. Alternatively, you may wish to use Vengeance and take the hit, inflicting large damage on the boss. Resonance and Reflect do not work against this attack.

Gulega is very similar to TzTok Jad, in that a player who is praying melee, and who rapidly switches to mage or range when appropriate, can negate a large amount of damage while killing the boss (except from its special attack). However, the Gulega has a faster attack speed, and time gap between the beginning of Gulega's animations and the time when its attack hits is significantly smaller than the time gap on Jad, making prayer-switching much more challenging.