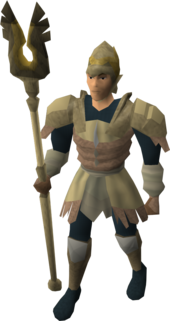 The Guardians of Armadyl are a military order loyal to Armadyl and based in the Temple of Ikov.

The Guardians are an ancient organisation spanning thousands of years, originating as the Ikovians. They have been protecting the Staff of Armadyl, an Elder Artefact once used by the god, protecting it from potential thieves such as demons or Mahjarrat. They are involved with the Temple of Ikov, While Guthix Sleeps, and Ritual of the Mahjarrat quests. Idria is the Marshal of the Guardians. According to Armacus, the order dislikes being in the temple and are looking for other hiding places.

To reach the Guardians of Armadyl, players can use a Shiny key to unlock the door to the shed on the northern edge of McGrubor's Wood, climb down the ladder to the Temple of Ikov dungeon, and then run west to the Guardian's headquarters. If players do not have one, they must proceed through the dungeon starting from its entrance north of Ardougne. In order to access the dungeon, players must be wearing the Pendant of Lucien, which Lucien (or the Local Thug) will provide freely.

Once entering the dungeon players must take the north gate then proceed out the northern exit of the first room. Ignoring the small room with the lever, they must then run west to the site where they fought the Fire Warrior of Lesarkus, who will not appear again. Players then talk to Winelda, who will teleport the player across the lava, this time without asking for any limpwurt roots. Players then run north until they reach a ladder (which leads up to McGrubor's Wood), then west, where they will reach the Guardian's headquarters. It is recommended that players run further west, then south past the lesser demons, to pick up a shiny key, which will make future trips much faster.

Players can also talk to or kill a Guardian to obtain an Armadyl pendant if they lose theirs.

Between Temple of Ikov and While Guthix Sleeps[edit | edit source]

If you've completed the Temple of Ikov quest and prevented Lucien from getting the Staff of Armadyl, a Guardian will hand you an Armadyl communiqué. It is from Idria and warns you that the staff is now threatened by Movario, a treasure hunter Lucien has recruited.

The Guardians of Armadyl side with the player against Lucien. Idria goes to the White Knights' Castle in Falador to help organise the plot against the power-hungry Mahjarrat.

Idria and the Guardians take part in the final battles against Lucien's summonings and the Zamorakian Mahjarrat. When the Dragonkin arrive, Idria attempts to negotiate an alliance with the Dragonkin, but in a display of power, she is killed by dragon breath.

Guardian of Armadyl speaks in: 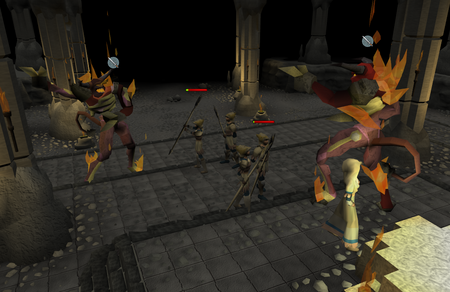 This information has been compiled as part of the update history project. Some updates may not be included - see here for how to help out!
Retrieved from ‘https://runescape.wiki/w/Guardian_of_Armadyl?oldid=35681055’
Categories:
Hidden categories: