Grotesque souls were a promotional Treasure Hunter prize that were used to unlock Grotesque Armour. They were available as rewards from 27 January to 1 February 2016. Players were able to release 10,000 souls every day, gaining up to 50,000 experience in Prayer or Slayer (depending on their skill level). Grotesque souls were also able to be obtained by killing any monster once every 10 minutes, granting 50 souls (or 100 souls if that monster was a Slayer task). Beings that do not actually die didn't count as a kill for grotesque souls, e.g. Cadarn rangers.

Any remaining grotesque souls were turned into five coins each on 29 February 2016. 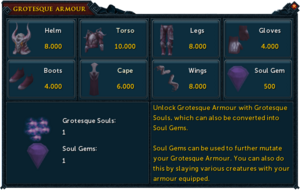 The interface for unlocking grotesque armour with grotesque souls