From the RuneScape Wiki, the wiki for all things RuneScape
Jump to navigation Jump to search
The Old School RuneScape Wiki also has an article on: osrsw:Grimgnash

Grimgnash Skullrot is a griffin featured in Grim Tales. Sylas wants a griffin feather from him, so during the quest the player tells him a bedtime story, in the hopes of taking a feather when he is asleep. If Grimgnash doesn't like the story, he inflicts 1000-1500 life points. After this, he falls asleep and doesn't wake up.

If Grimnash is interacted with outside of the quest, he requests food, such as the player themselves, and then states that he is too tired to eat the player. When an object is used on Grimnash, he states he does not care for "stupid human things" and that he is hungry. He then attacks the player, inflicting up to 1051 damage. 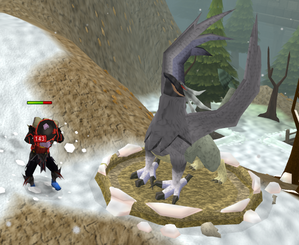 He is currently the only known griffin in RuneScape.

The Postbag from the Hedge 22 of Postbag from the Hedge features a letter to, and reply from, Grimgnash. The reply from Grimgnash in the Postbag consists of a 'story' from a strange lady with white paint on her face, who appears to be the Oracle, but in fact it hints future updates by almost a year ahead, featuring unreleased updates at that time. In the desert the scarab waits.-Dealing with Scabaras

The institute reports a random fluctuation in rates of production.- ZMI Altar

Look beneath the Plain of Mud.-Land of the Goblins