From the RuneScape Wiki, the wiki for all things RuneScape
(Redirected from Grim tales)
Jump to navigation Jump to search
The Old School RuneScape Wiki also has an article on: osrsw:Grim Tales
For the achievement, see Grim Tales (achievement).

Grim Tales is a master quest that revolves around collecting a couple of rare items for Sylas, a peculiar collector. It contains many references to various real-life fairy tales.

"Once upon a time in a land far, far away..." Sylas, a collector of items both wondrous and unusual seeks out the latest additions to his trove with a somewhat unusual prize for the finder.

Terrors and towers await; fierce battles with giant beasts; striding boldy[sic] to rescue a dwarf in distress! Not a quest for the meek or faint-hearted, prepare yourself for a feast of fairytale fun with rewards a-plenty! The Brothers Grimm could never have foretold a tale such as this...

Talk to Sylas, who can be found west of Falador and south of Taverley, at his farming plot just north of the Witch's House. Sylas, a collector by profession, is in possession of some "magic beans", which he is willing to part with if you can bring him a couple of "trinkets" for his collection.

From Sylas, head to the White Wolf Mountain; Grimgnash is located on the north-east corner. The apparently angry griffin says that it cannot get to sleep because of the howling wolves, and demands a bedtime story from you, failing which he would eat the player.

Grimgnash says he loves stories with death, fire and destruction. Proceed to narrate to him a bedtime story by selecting the options which sound the most violent (the numbers in brackets are for those controlling the dialogue using the keyboard):

At this point, you can answer with any of the remaining choices.

Once Grimgnash is asleep, steal a feather from the pile next to his nest.

Location of the tower

Next, travel to the tower between the Goblin Village and Ice Mountain using a Goblin village sphere or using some other form of travel. If you attempt to get in by the door of the tower, Miazrqa will stop you. In order to locate Rupert, you will need to go around to the back and climb over the crumbling wall (requires 58 agility).

Once inside the compound, talk into the pipe and you will find that Rupert the Beard has actually been imprisoned at the top of the tower.

Talk to Rupert to find out how to get up the tower, and he suggests climbing up is the only viable option. Ask if there is anything up there that would help and he will throw down his beard. Climbing up the beard requires level 59 Agility (as does climbing back down).

Rupert imprisoned in the tower.

Rupert explains to you his plight - His gnome friend, Winkin, disappeared when he was delivering ogleroots to the market in Draynor Village. When he asked around, he found that Winkin was last seen talking to a witch. On still further investigations, he came upon Miazrqa, the arrogant princess outside the tower; as it turns out, Miazrqa is related to the witch last seen with the gnome.

Rupert admits to flirting with the princess to pry information out of her, but that when invited back to her tower, she slammed the door shut behind him, locking him in. And so, regrettably, he cannot give you his helmet as the princess has stolen all his armour.

Rupert asks you to talk to the princess and convince her to release him. Climb down the tower using the dwarf's beard and talk to Miazrqa, who says that she will happily release the dwarf if you can return her pendant, stolen by a mouse in her second cousin's (twice removed) house, a.k.a the witch's house, south of Taverley. 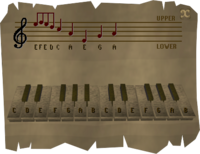 Ask the princess for a house key in order to enter her cousin's house (or, if you forget, you can look under the potted plant near the door, for a key to the house).

Go to the basement of the witch's house. Make sure you are wearing a pair of leather gloves, so as to avoid an electric shock from the gate and lose 20% of your max life points.

Once you successfully play the melody, a compartment will open revealing three items in it - a shrinking potion recipe, a 'to do' list and 2 shrunk ogleroots. Read the recipe to mix a shrinking potion - use a clean tarromin with a vial of water and complete it by adding the ogleroot. Make 2 shrink-me-quick potions now, as you will need one later in the quest.

With the potions made, go back up to the small room leading into the garden. Drink one potion while standing next to the 'Witch Glyph' on the wall, near the mouse hole. Due to the potion and the glyph's magical properties, the player will suddenly shrink and enter in the mouse hole.

If you lose the shrunk ogleroot or waste a potion, you can go down the manhole just outside the entrance to the witch's house and kill an Experiment No. 2, which will always drop one; they also commonly drop tarromin.

There are aggressive mice in the mouse hole. Make sure you have prayer and/or good food just in case. Also, be sure to bring a teleport of some sort, or if you want to use the home teleport, there is a safe spot behind the rock where you find the pendant. Do not attempt to go through the grates as this will cause you to leave, voiding the glyph's magic. 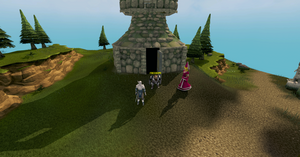 From here, you can teleport out by using a Goblin village sphere or some other form of teleportation. If using a lodestone, you can either kill the nearby mouse or go behind the rock that the pendant was on. Alternatively you can backtrack out the way you came in and you will revert to regular size as you exit the mouse hole. Take the pendant back to Miazrqa, who keeps her promise and releases the dwarf.

Fumbling with his armour, Rupert finally manages to exit the tower. As a token of thanks, he offers you his special helmet.

Sylas and the beanstalk[edit | edit source]

Travel back to Sylas and give him Rupert's helmet, along with the griffin feather. You realise that Sylas is actually interested in some bigger fish. In exchange for the beans which, in fact, are not magical, he wants you to get one final piece of collectable for him - a golden goblin.

Legends speak of a tribe of goblins that discovered an abandoned dwarf mine and decided to extract and use the ore for purposes unknown. Led by a shrewd goblin named Gubblebak, the group created some of the finest smelting works. Gubblebak, although a great business head, was cunning and had a pervasive affinity to gold. He eventually over-worked his goblin army into mutiny, which ended in him being thrown into a vat of molten gold. He somehow survived, only to fall into a trough of water next, causing the heated gold to solidify and effectively kill him, and create a casing around his body.

The artefact is, since then, known to reside in the clouds, protected by a giant and Sylas wants you to retrieve it for him. He points out to you that the reason why Rupert has such a long beard is because of a special growth potion that was present in his helmet. Using this potion, you may be able to access the land of the skies.

Take the beans and plant it in the special patch beside Sylas. A watering can is required; you CANNOT use the magic watering can on your tool belt, or if you have one stored in a tool leprechaun's inventory, one can be found at the north-east tree patch in Taverley, or you can purchase one at a farming store.

After watering the patch, a cutscene plays where a giant beanstalk grows up in the place of the beans.

Get ready for a fight with Glod, a giant. When you're ready, climb up the beanstalk. You cannot bring any familiars up the beanstalk, not even pouches in your inventory. High level players will have no difficulty with the battle.

Glod has no special weaknesses, but he is highly resistant to melee and range. Using magic attacks to defeat Glod is advised; if you have access to level 50 weaponry, it should be fairly easy to dispatch him. 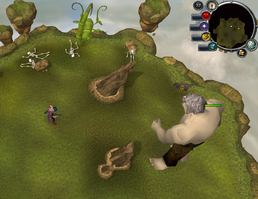 Glod, a cloud giant, will attack you immediately. Due to his prayer disabling abilities, he is much more difficult than his level suggests. He can also drain prayer too, up to 500 points at a time, hence a prayer potion might be necessary.

He will sometimes taunt you, causing your character to attack him head on. He may also quake the ground, hitting you hard and draining your prayer. If you have Ancient Magicks, you can freeze Glod and not have to worry about having to hide. Glod may also heal himself during the battle, therefore you should keep attacking him whenever you can, in order to defeat him as quickly as possible.

For melee: If you stand next to a jutting rock, with Glod facing you semi-diagonally (which happens naturally), his "run-away" taunt will not have any effect. The description box will say the same thing as if you did run the approximate 4 spaces away from him, but you will stay in place and be able to attack him again faster. The southernmost rock on the west side works best, as you enter the floating cloud island right next to it. 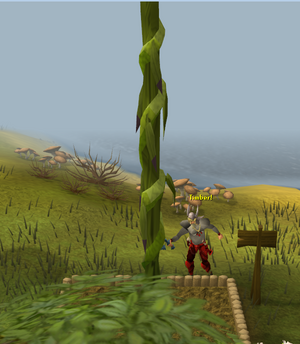 Cutting down the beanstalk

Once you defeat Glod, he'll drop the golden goblin along with two sets of big bones, an uncut ruby, an uncut sapphire, and a watering can. Take the golden goblin back to Sylas, who also requests you to chop the beanstalk down, in case someone plans to seek revenge for Glod. Use a shrinking potion on the beanstalk to activate the glyphs where you fought Glod and shrink the beanstalk, then take a hatchet and chop it down. Go back to Sylas again for your reward. 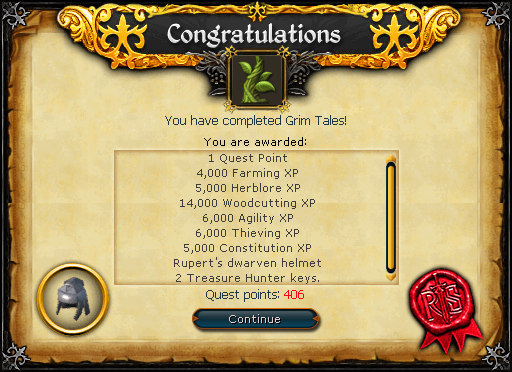 Grim Tales is not currently required for any quests or miniquests.