From the RuneScape Wiki, the wiki for all things RuneScape
Jump to navigation Jump to search
This article is about the underworld of RuneScape. For the programming term, see The Underworld. 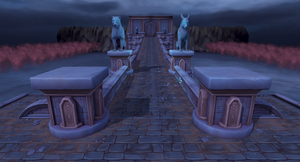 The gates leading to the Grim Underworld.

The Grim Underworld, known as Niflheim to the Fremennik,[1] and more commonly simply the Underworld, is a world parallel to Gielinor. It is the liminal space through which a soul passes on their journey to their final resting place — the afterlife.[2] The Underworld is fraught with danger, most notably the soul-devouring beasts of the goddess Amascut. The protector and guide of the souls passing through the Underworld is Amascut's brother and rival Icthlarin, god of the Underworld.

The entrance to the Grim Underworld is found deep beneath the surface of Gielinor, through the gates across the River Noumenon, the river that marks the boundary between the land of the living and the dead.[2] It may be accessed through Death's door in his office. Another passage to the Underworld can be found in the Sophanem Slayer Dungeon, called the First Gate. It leads to the necromancer Oreb, who appears to control the crossing. Further access down the crossing is blocked by two barriers.

The Grim Underworld is exclusively the Underworld of the planet Gielinor. Other worlds in the universe have Underworlds of their own.[3] Those with especially strong attachments to another world may find themselves drawn to that world's Underworld instead,[4] as is the case with the Fremennik.[1] Underworlds are also not to be confused with afterlives. Whereas each world has only one Underworld, they have a nigh-infinite amount of afterlives within them, created from the beliefs and unconscious expectations of the souls that inhabit them.[3]

The journey of the dead[edit | edit source]

After a person has died, Death untethers their soul from their body with his scythe. He then deposits them by the gates to the Underworld where Icthlarin stands guard. [5] Once enough souls have amassed on the bridge, Icthlarin marches them through the Underworld in an orderly formation.[6] Icthlarin leads them through the darkness with the light of his green torch and protects them from Amascut's devourer beasts, which roam the Underworld in packs. Once the souls reach their afterlives, Icthlarin returns to his post at the gates of the Underworld to do it all again. Over time, some souls are inevitably lost to the monsters. Icthlarin takes the loss of these souls very seriously, as a personal failure.[7]

All underworlds, including the Grim one, have in common that whoever is the first to ever die on that realm becomes the escorter of the dead, as was the case with Harold Death.[8]

Previously, Amascut served as a goddess of rebirth and would have offered worthy souls the opportunity to be reincarnated. With Amascut having gone mad, this duty now also falls to Icthlarin, making reincarnations rarer.[9]

The Demon butler Alathazdrar claims to have once served as a ferryman on the River Noumenon, but left to pursue other interests in Gielinor and the Infernal Dimensions.[10] This suggests that the Grim Underworld is not necessarily impossible to enter or leave at will, which is further demonstrated with the reincarnation of Robert the Strong into Bob the cat.

Concept art of the River Noumenon, and gates to the Underworld.