From the RuneScape Wiki, the wiki for all things RuneScape
< Grifolaroo
Jump to: navigation, search

Grifolaroos are monsters found in Polypore Dungeon, requiring 82 Slayer in order to be killed.

Grifolaroos use both Magic and Ranged attacks against players. The ranged attack prompts it to turn around and launch barbs, while it makes a squeezing motion to launch a transparent projectile as ita magic attack.

When attacked and the player is not within 2 spaces of the Grifolaroo, it will yell Hup! and jump 3-4 spaces towards the player - it may also get itself stuck in an inaccessible area on the platform at some cases. The player will briefly lose track of the Grifolaroo as it jumps, after which it becomes targetable again shortly after it jumped. Grifolaroos will also attempt to close in on the player to infest them with fungi.

Due to the jumping mechanic, it's best to stay within melee distance of a Grifolaroo so it does not jump. Spraying neem oil will prevent infestation damage, although they should be taken down quickly. 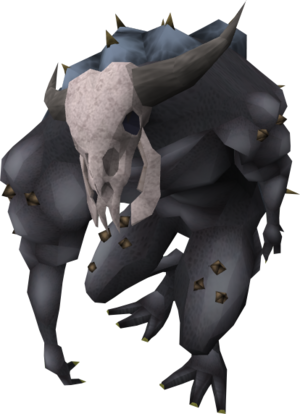 A Grifolaroo affected by neem oil.

Note: Any form of antipoison will NOT have any effect to resist the effects of the toxic fungus.