From the RuneScape Wiki, the wiki for all things RuneScape
< Grifolapine
Jump to navigation Jump to search 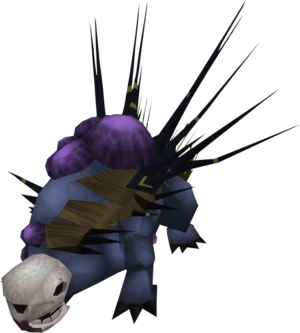 Grifolapine, found at the third level of the Polypore Dungeon, are commonly killed to create the grifolic armour set. In addition, they are the only monster that drops the grifolic wand and grifolic shield.

It requires a Slayer level of 88 to kill, and 60 Magic for the player to receive as a Slayer assignment.

Similarly to Grifolaroos, Grfiolapines attack with both Magic and Ranged. The magic attack utilizes the same projectile as all the other creatures in the dungeon, except the Grfiolaroo simply shakes slightly as a visual indicator. As its ranged attack, it flips around to launch barbed spines.

When in combat with a player, the Grifolapine will occasionally yell Raargh!, charging at the player at a speed of 4 tiles per tick (twice that of a running player) in an attempt to infest them with fungi. If the Grifolapine cannot reach the player, it will say *sigh* instead, before resuming standard combat. The Grifolapine's platform consists of holes or fungal growths which can be used as safespots from the charge attack.

If standing next to a Grifolapine with active fungi, it will infest them with fungi for 50-150 damage per tick, but not use any other attacks. If sprayed on with neem oil, the Grifolapine will only use ranged attacks until its fungi regrows.

The following skill levels are recommended for killing Grifolapines. While they are not necessary, they will unlock valuable, helpful perks.

Generally, higher-tier Magic equipment is best against Grifolapines. However, expensive, top-tier armour such as seasinger's equipment and ganodermic armour may not be cost-effective at Grifolapines due to their high repair costs. For this reason, offensive armour is recommended above tank armour.