From the RuneScape Wiki, the wiki for all things RuneScape
Jump to navigation Jump to search
Morytania guardGregGreg? (edit)? (edit) 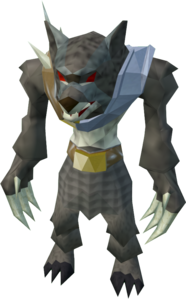 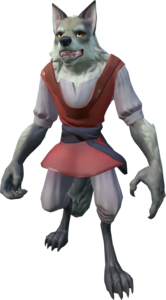 Greg is a Morytania guard and a werewolf. He guards the gate from the Paterdomus Mausoleum into Morytania. He can be found chatting with his co-guard Alex. He has recently gotten into baking with chocolate and baked a dish for Sally, Alex's significant other.[1] He is also excited by trade with other kingdoms and hopes that Misthalin fashions start coming to Morytania as well.[2]

Greg has a romantic interest for his friend Ed, who he describes as a "wolf with lustrous brown fur". Alex attempts to set Greg up with Ed, to which he reacts by jokingly threatening to kill him.[3] During their trip to Draynor, Greg refuses to pair up with Ed, and after preparing special bait for a sea monster, Greg tells the player to wish Ed well before aggressively telling them not to mention anything. After both their tasks are complete, Greg sees Ed wearing an amulet and they arrange to go on a date, an act which causes Morgan to welcome them into the village.

The two guards' dialogue indicate a point in time after River of Blood. However, they appear immediately after Priest in Peril is completed, 8 quests prior.

Greg plays a part in the Halloween events since 2021.

Transcripts Greg (werewolf) is the author or co-author of: