From the RuneScape Wiki, the wiki for all things RuneScape
< Green dragon
Jump to: navigation, search
Location of green dragons in the Wilderness near the boneyard.

Due to the return of the PvP Wilderness, it is far more profitable for players wishing to make money to kill blue dragons rather than green dragons, as if you choose to kill green dragons, you will very frequently be killed by waiting PKers, who nearly always have teleblocks and ice barrages in their arsenal, preventing escape. It is important to know that Clan Wars have been relocated, because the games necklace will no longer work here.

WARNING: If you kill these monsters in the wilderness, you should not take any items you are not willing to lose. If you are killed in the wilderness, you will only keep your 3 most valuable items, unless you initiate an attack on another player. In which case you will lose all items unless Protect Item is utilised, in which one item will be kept.

Most people fight the dragons with melee. This is not recommended unless you are using at least a dragon weapon (the cheapest feasible melee weapon that can be used is the dragon dagger, though the abyssal whip also works fairly well), as the dragons have moderately high melee defence and will deal consistent damage with their magic attacks. If fighting using melee, you will need to use a good rotation of both offensive and defensive abilities if you want a good kill rate, and even then, it will not be as good as using ranged or magic. If you use dual-wielded or two-handed weapons, you will either need to continuously use Protect from Magic or bring super antifires (as well as more food since you cannot use shield abilities). You also stand the biggest risk of death if you go after them in the Wilderness, as the most common player killer attack is from a mage, which will usually try to stun and/or teleblock you to prevent escape. They will succeed frequently as your melee armour will conduct magic.

Since dragons are magic-class monsters, they are weak against ranged attacks. Their specific weakness is bolts, but unless players wish to use Protect from Magic or Super antifires while killing them, they will be forced to wear an Anti-dragon shield or equivalent. Players who have completed Ritual of the Mahjarrat can alternatively opt for Dragonbane bolts, which deal extra damage to dragons (this stacks with abilities), and are considerably useful when used with the Royal crossbow.

Magic is rarely used as a method of killing green dragons due to the slightly higher cost compared to melee, but it hits more often than melee and can still be done with a profit. 80+ Magic is recommended but optional. A polypore staff, which requires 80 Magic to use (80 Farming to charge, but this is optional) would be a good choice if you have to use magic against them, as the staff's built-in spell hits quite hard, you don't lose runes if you die, and the charges for the staff is relatively cheap. If using this approach however, be sure to bring Super antifires or use Protect from Magic, as you will be unable to use a shield. If you lack the required level for the polypore staff you can instead use another staff. If you want to play it safe, bring a wand and an anti-dragon shield. Use the strongest air spell you have access to (to save on rune costs).

A good method for quickly banking drops from the eastern green dragons involves the use of the Ring of kinship at level 20 wilderness or below. Teleport to Daemonheim, bank with the Fremennik banker, then run southwest and north to return to the dragons. Using an amulet of glory or the Edgeville lodestone teleport is a fast method for banking from the western green dragons. The wilderness obelisks can be used for the northern dragons.

People seeking a profit by killing these creatures can make approximately 32,270 per inventory of bones and hides. To make greater profit, however, the only other items recommended worth taking are: 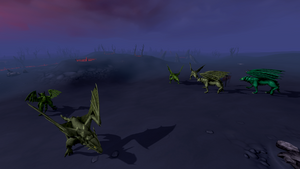