From the RuneScape Wiki, the wiki for all things RuneScape
(Redirected from Greegrees)
Jump to: navigation, search
The Old School RuneScape Wiki also has an article on: osrsw:Greegree

Greegrees are magical talismans used for transforming into a non-human primate, however their use is bound to the island of Ape Atoll and the Ardougne Zoo. When in the primate form, all monsters on the island become non-aggressive.

The greegrees are used in the Monkey Madness, Recipe for Disaster, and Do No Evil quests. At the very start of Monkey Madness, players will only be able to obtain a Monkey talisman by talking to the crying child in the house to the west of the monkey settlement when wearing the Monkeyspeak amulet. When they have had the greegree charged by Zooknock, additional Monkey talismans can be bought from the Magic stall for 1,000 coins each.

If a greegree is lost or destoyed, you will need to make a new one with a set of monkey bones and a new talisman (obtained from the monkey child), then bring them to Zooknock. All the other greegrees that have been previously combined will remain when you make a new greegree. 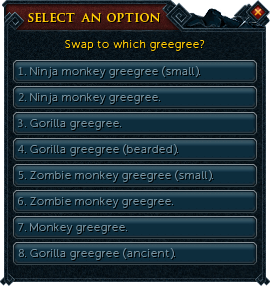 The interface showing available greegrees to choose from upon swapping them.

NOTE: It is possible to swap a greegree that has not been used on another, and therefore has not been added to the swap interface. Doing so will change the greegree and will unlock the swap option.