From the RuneScape Wiki, the wiki for all things RuneScape
Jump to: navigation, search
Greater missile platform? (edit) 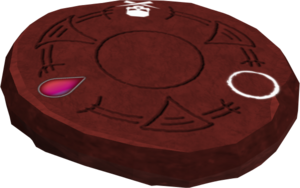 Runes will only be consumed when moving between two similarly sized islands, and from a larger island to a smaller one. Moving from a small island to a much larger island consumes no runes, to prevent players from getting stuck on dead end islands.

When using the greater missile platform, the player turns into an Surge spell of the elemental rune used and are send flying to the other side.