A Greater conjuration platform is a platform found on the top level of the Runespan and is used to cross between islands. It requires a mind rune, a body rune, a death rune, a blood rune, a soul rune and a rune essence to use, along with level 95 Runecrafting. Using it will consume 9.9 Runespan points.

Runes will only be consumed when moving between two similarly sized islands, and from a larger island to a smaller one. Moving from a small island to a much larger island consumes no runes, to prevent players from getting stuck on dead end islands.

When using the greater conjuration platform, the player summons a large dragon-like creature to cross the gap. 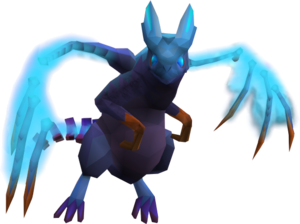