From the RuneScape Wiki, the wiki for all things RuneScape
(Redirected from Great Orb Project)
Jump to: navigation, search 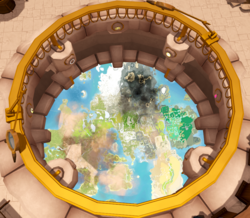 The minigame can be played from the Runecrafting Guild, which can be accessed through a portal on the top floor of the Wizards' Tower, found south of Draynor and south-west of Lumbridge.

Different ways of reaching this area include:

The objective of the game is for players to move as many orbs corresponding to their team colour as they can to the altars, as well as keeping orbs of the opposite team away from the altar. The team with the most orbs that has gone into the altar when the timer runs out wins the round. 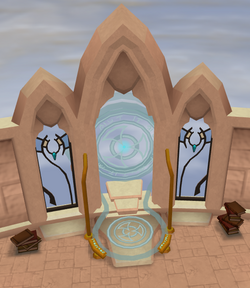 To join a game, players may talk to Wizard Acantha to join the green team, Wizard Vief to join a yellow team, or other Wizards found in the guild to join a random colour team. A timer starts after each team has at least two members. The timer lasts for one minute, after which a portal opens in the north end of the room allowing players to enter the game. In order to join a team, players need to have at least 2 free inventory spaces and empty weapon and helmet slots. In addition, the player must deactivate any head override in order to play.

There may be 2 to 5 players per team, but the timer will not run unless:

Players may not join a team that already has more players than the other team.

To leave a team before the start of the minigame (before the portal has opened), players can simply destroy any of the given wands or speak to any wizard in the Guild to leave a team. Doing this will not result in any penalty (see the section on Abandoning the game).

Three wands are given when players enroll to either team, namely an Attractor wand, a Repeller wand, and a Barrier generator. A Runecrafter hat is also given to distinguish which team players are on. The hat and attractor wand are equipped automatically.

There are 6 altars for free players and 8 altars for members, which are the following Runecrafting altars in sequence:

The rest of the altars are not included in the minigame.

Each altar lasts 2 minutes (that is, 200 ticks), excluding a small break of 15 seconds between each altar. A complete F2P game lasts 13 minutes 30 seconds, while a P2P game lasts 18 minutes. There may also be a waiting period of up to 1 minute before starting a game although it may take longer if there are not enough players to start.

In the battle[edit | edit source]

Your team has claimed the altar!

Your team has lost the altar.

To score points, the team's orbs must be led to the 1-grid square around the altar with an appropriate wand, by either attracting or repelling the orbs which will spawn randomly in one of the ca. 200 fixed spawnpoints per altar. Orbs respawn once they touch the altar. There are 3 orbs of each colour at a time. Note that it is also possible to attract or repel the opposing team's orbs until the last 30 seconds of the game.

During the minigame, an activity bar is present next to current score indicator, which shows how active the player is. This bar gradually depletes over time. Once a player's bar reaches the bottom, the player will be removed from the minigame and sent back to the Guild. In order to keep the bar up and to stay in game, players must attract/repel orbs or create and destroy barriers which will fill a portion of the bar. The bar is reset and pauses at each break between altars, to start back at the start of the next altar.

End of an altar[edit | edit source]

After each round, players will receive a number of Rune essences (or Pure essences for members) equal to their team's score minus half the other team's score, plus 1. If this number is below 1, the player still gets 1 essence. If players' inventories are full, the extra essences will be left on the ground. Players can then choose to craft them into runes at that altar or to keep them for later use.

After a few seconds, a purple portal will appear in the altar. Players will need to step into it to be teleported to the next altar for the next round. People who stay behind at the altar will be dragged into the next round 30 seconds after its start. After the final altar, the portal will teleport players back to the Guild.

A game can also abruptly end if members of either team quit the game which may send all players back to the Guild if there are not enough players to keep the game in session.

If the player leaves an on-going game, they will be sent back to the Runecrafting Guild. Some ways a player can achieve this is by destroying any of the wands, letting their activity bar reach bottom or losing connection. Abandoning the game at the beginning will result in a 10-minute time penalty for F2P and 15-minute penalty for P2P where players will be unable to play the next game until the penalty expires. This penalty will decrease to a minimum of 1 minute as the game progresses through the altars.

In order for a player to gain tokens at a decent rate when playing against a random sample of players in GOP, they have to learn some basic strategies for playing efficiently, unless they have consistent teammates that help them and are good at GOP, or if they play against bots, or if they fix the game results in something called 50/50 (each team win half of the altars). The most advanced strategies are less needed when just trying to get tokens, but they are very interesting when the motivation is to play GOP in a competitive way, going for high scores and tournaments. See The Great Orb Project/Strategies for some guidance in how to play GOP effectively.

Your team was victorious!

In addition to the essence received after each round, Runecrafting guild tokens will be awarded at the end of the game. For each altar that a team wins, each player on that team receives 100 tokens. For each altar lost, players receive 10 tokens. For each tied altar, players receive 25 tokens. An additional 200 tokens for members, or 150 tokens for free players, are awarded to players on the team that won the most altars. If both teams win the same number of altars, then the majority bonus is split evenly between both teams (100 tokens for members and 75 for free players). Therefore, the maximum number of tokens members can receive is 1,000, while for free players it is 750.

These tokens can be traded with Wizard Elriss at the entry of the Guild for robes, teleportation tablets, essence, talismans and staves. All of these rewards are untradeable, except for the essence and talismans. Ironmen are unable to purchase any rewards excluding cosmetic rewards and a single Blood altar teleport.

Buying a Runecrafting staff costs 10,000 Runecrafting guild tokens. Binding a talisman to the staff (by using either of them on the appropriate altar) creates the corresponding talisman staff. Once wielded, this allows players to enter the designated altar through the mysterious ruins, as well as distracting the eyes in the Abyss to help them sneak past. Once a talisman is attached to a staff, it cannot be disassembled.

The last reward a player may buy with their Runecrafting guild tokens is essence. Although the reward screen says "Rune Essence" on both free worlds and members worlds, the type of essence received actually depends on which type of world the player is on. Players on free worlds obtain Rune essence, while players on members worlds obtain Pure essence. Players can specify the amount of essence to buy with a Buy X option. The essence are noted for convenience.

The best money making method for free players is to buy talismans, which are usually the best.

Free players can get up to 750 tokens each game, equating to 15 water talismans in 14 minutes and 30 seconds. Free players can potentially earn up to 158,000 coins per hour.

Members can get up to 1,000 tokens per game, equating to 20 water talismans in 19 minutes. Members can potentially earn up to 161,000 coins per hour. Because demand for the talismans is driven by its use in Geyser Titan pouches, the price fluctuates more rapidly than other talismans.

Alternatively, members may purchase pure essence, up to 1,000 pure essence per game, potentially resulting in 120,000 coins per hour.

Another great way to make money is by purchasing Teleportation tabs as they can be useful for Runecrafting runs. One can expect altar runs to be reduced to 20 seconds each, consuming around 180 tablets per hour.