The Great Migration, or Grand Migration, was a voluntary mass-emigration by the gnomish race led by King Healthorg at the end of the Fourth Age. The gnomes spent roughly fifty years underground until they resurfaced in the early 5th age. The King had promised it would be a liberation to the gnomes, but upon resurfacing the gnomes came into conflict with the dominant humans.[1] The Migration saw the complete re-location of the gnome populace from subterranean settlements to the surface, where they re-discovered the Tree Gnome Stronghold. 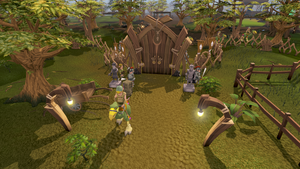 The Tree Gnome Stronghold was the Migration's primary ending point

Prior to the God Wars, the gnome populace inhabited the area that is now Kandarin in large numbers. The Tree Gnome Stronghold experienced relative prosperity by the Second Age's standards, trading with races such as humans and elves and fending off hostile forces when necessary. The early Third Age, however, saw the race's near destruction, ultimately leading the entire populace to hide beneath the surface, much like the dwarves of Keldagrim.

When the Third Age ended, the gnomes learned of this quickly despite their position in hiding. Hoping to live on the surface once more, the race partook in an emigration they called the Great Migration. They re-discovered the location Tree Gnome Stronghold, which was now completely non-existent. Many also travelled further south, where they established the Tree Gnome Village.

The Migration as a whole was a success for the gnomish people. However, conflicts such as the Khazard - Gnome War and Arposandran War have caused some modern gnomes to question the actions of their ancestors. In the late Fourth Age, a radical group led by King Healthorg the Great's former advisor Glouphrie left the Gnomish Empire and established Arposandra near Tirannwn's southern border. The establishment of the subterranean city marked the first significant reversal of the Migration.