From the RuneScape Wiki, the wiki for all things RuneScape
Jump to navigation Jump to search
The Old School RuneScape Wiki also has an article on: osrsw:Graveyard
This article is about the graveyard in Morytania. For other uses, see Graveyard (disambiguation).

The Graveyard is located north of Castle Drakan in Morytania, east of the Mort Myre Swamp. The grave in the centre holds the Desert Treasure boss, Dessous.

Dessous escaping from his tomb during Desert Treasure

This graveyard mainly features in Desert Treasure quest. The player must fight the vampyre Dessous in order to obtain the blood diamond during the quest. On the way there, the player might encounter several ghasts and some vampyres, so it would be wise to bring along some druid pouches or risk having your food destroyed. The Graveyard currently has no uses outside the quest. It can be seen from atop the walls around Castle Drakan.

When taking part in the Temple Trekking minigame, there is a chance that an event will be encountered at the graveyard. A number of level 15 and 75 skeletons will attack the player. They need to be killed either through combat, or lured to the tomb in the middle and click on the tomb to activate it and unleash its power - all skeletons which are struck against the fence will be hit by 700 (1 hit K.O.). Once all skeletons are defeated the trek can be continued.

While the magic damage dealt by the tomb is displayed as critical, it does not interact with adrenaline gain on crit buff abilities, such as Incendiary Shot. 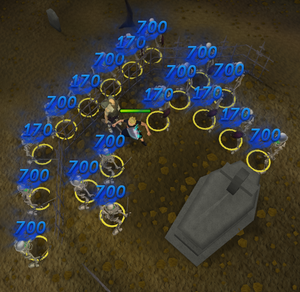 This information has been compiled as part of the update history project. Some updates may not be included - see here for how to help out!
Retrieved from ‘https://runescape.wiki/w/Graveyard?oldid=35773580’
Categories:
Hidden categories: