From the RuneScape Wiki, the wiki for all things RuneScape
(Redirected from Grave)
Jump to navigation Jump to search
The Old School RuneScape Wiki also has an article on: osrsw:Gravestone
"Graves" redirects here. For the Black Knight, see Lieutenant Graves.
For what happens when a player dies, see Death (mechanic). 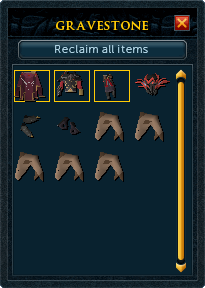 Reclaiming items from one's own gravestone.

Gravestones are generated when a player dies through any means except in the wilderness and safe activities (whereby no items are lost, hence rendering a gravestone useless) and exits Death's office without reclaiming them. Players must also have dropped at least one item upon death in order to receive a gravestone. All of the player's items are kept safe under the gravestone until it collapses. This can occur either due to the gravestone timer expiring or demolition by the player.

Gravestones can last from 1 minute and 45 seconds to 3 minutes, depending on the type purchased. The time remaining before the collapse of a player's gravestone will be displayed on their screen if they have a gravestone active. Once a type of gravestone has been selected and/or purchased, the player will continue to use that type of gravestone until they choose to change it.

A player's gravestone is only present in one world. This means that if the game crashes or your internet is down while you try to return to your gravestone, you must return to the world you died in to retrieve your items. If you die in one world and go into another, upon entry you will be asked if you want to go back to the world you died in. However, if the grave collapses the player can reclaim their items from Death regardless of the world they died on.

If you die in a King Black Dragon instance then your gravestone will spawn in the regular encounter, not the instance. A King Black Dragon will probably be active so antifire protection should be used to avoid a second death.

If one dies a second time before the items from their previous grave are retrieved, assuming one was carrying more than the protected amount of items, the rules are as follows:

The interface of the memorial plaque, the default gravestone.

Gravestones have a number of options when right clicked. These options are Read, Repair, and Bless.

Players can choose a number of different gravestones for use by their character. In addition to having different appearances, some will also last longer before collapsing and provide discounts to reclaiming items from Death. Gravestones do not downgrade if the player dies or their membership expires. However, setting a gravestone as active does not unlock it for unlimited future use. For example, if a player selects a small gravestone for 500 coins and later decides to switch to a Font of Life, then choosing the small gravestone again will cost another 500 coins.

Gravestones can be purchased from Father Aereck in the Lumbridge church after completion of The Restless Ghost quest, and from Blasidar the sculptor in East Keldagrim by members who have completed the The Giant Dwarf quest. Both shops offer the same options, depending on which prerequisites are met.

Additional gravestones can be purchased after completing the The Giant Dwarf, as well as any of the specific prerequisites listed next to each gravestone type.

These gravestones were available from the 2015 Halloween event for 5,000 Noumenon Favour. They will always show as an option, even when locked. It's not currently possible to unlock them.

Signs of respite (I, II, III) may be used to increase your gravestone timer by 12, 21 or 30 seconds, respectively. These are made with limestone and divine energy. Simply wield them and they will activate.