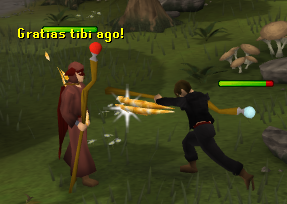 A Fire Wizard using the ability

Gratias tibi ago is a special ability the four elemental wizards of Asgarnia have. If a player casts a spell of the wizard's type on him, he will shout "Gratias tibi ago!" and it will heal the wizard. For example, if the player does ninety damage on an earth wizard by casting Earth Wave on him, he will shout the words and will be healed. The elemental wizards are the only ones known to have this power, but Malignius Mortifer, their leader, is believed to have taught it to them, although he has no use of it as he cannot be attacked.