The graphics in RuneScape have been continuously evolving, from the simple RuneScape Classic graphics to nowadays' RuneScape HD. This evolving is made possible thanks to fast internet connections and the improving performance of players' computers and Jagex's technology.

DeviousMUD was the predecessor of RuneScape Classic, written in 1998 and then rewritten and released as a public beta, for only one week, in 1999. There are very few screenshots of it, from which very simple, isometric graphics can be seen. RuneTek 1 was used to develop it. RuneScape Classic, which RuneScape members can play today, is the newer version of DeviousMUD, released in October 1999. It has four separate views, one in each of the cardinal directions (North, East, South, and West). The players, NPCs and monsters are 2D sprites in a fairly low-detailed world.

With the release of RuneScape 2 on 1 December 2003 as beta and on 29 March 2004 as full release, Jagex unleashed a 3D engine, which brought many graphical improvements. Two detail levels were available: Low Detail and High Detail (not to be confused with the graphics option called High Detail). High Detail offered, among other improvements, musical effects and more texture than Low Detail. As the RuneScape map expanded with the release of new areas, many new visual effects, such as snow on Trollweiss Mountain and the electrical effects in the Killerwatt plane, were added in-game. Also many old and more visited locations, such as Varrock, Falador and Lumbridge, were updated among other graphical updates.

RuneScape High Detail came out on 1 July 2008 as a beta for members and was released on 14 July 2008 as full release for all players. High Detail offered, for the first time in RuneScape history, the full screen mode, although it could also be played in the fixed mode. HD was updated to offer also the resizable window mode on 5 August 2008.

On 2 September 2009, RuneTek 5 was released, being previously explained in RuneTek 5 Developer Blog. The most important technical update of RuneTek 5 was that RuneScape SD and RuneScape HD (previously RuneTek 3 and 4 respectively) could be run on the same game engine and that different graphics platforms (such as DirectX and OpenGL) could be targeted on it. Standard Detail got revamped with the incorporation of full screen/resizable mode, the fog effect, blending, and underwater visibility. Both SD and HD were given an improved minimap and HD got shadowing across all world levels. This update also fixed several long-standing bugs, such as Grand Exchange mis-clicking, and made possible the future introduction of new graphical effects including:

Particles were introduced for the first time into game during 2009 Christmas event by using them to create snow effects. 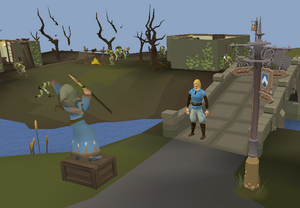 The graphics of Runescape on the lowest settings.

On 8 February 2010 SD was further updated with improved performance, textures, shadows, and lighting, making it similar to HD. This new version was intended for people with fast CPUs but poor graphics card and, in fact, new SD used more CPU than HD. The old SD was named Safe mode for people who wished to continue use of that mode.

DirectX support was added on 13 May 2010. It looks identical to OpenGL HD mode but gives fewer compatibility problems for those who use Windows. With this update, the graphics option system was overhauled to allow for ease of use. Auto configure option was also released, but with the manual setup still there.

On 15 September 2010 Z-buffering was released, which brought graphical and performance improvements to all graphic modes. This update made possible the modeling and animation of players and NPCs outside of the 'square' on which they stand, allowing for more complessive appearances. In addition, more impressive area sceneries can be released due to this update. 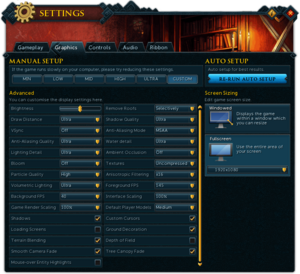 On 24 November 2010, Graphics Options got changed by completely separating the mode in which the game displays from the specific graphical effects you can set. More players are able to run Open GL and DirectX modes, while Mac and Linux users can play in Open GL and Software, respectively. Safe mode was removed completely, with the only way to enable it being to hold "S" while the game was loading. Also, the interface was updated significantly. Found out later, you can still enter Safe mode by turning on a setting that your graphics card cannot handle and an option for it will come up next to other modes. On 15 March 2011 Lumbridge Swamp received a graphical update including a darker look, new trees, graphically updated mining rocks and ambient sounds.

On 4 April 2011 The area south of Falador received a graphical update including initial the Clan Camp, new looking trees and some other ambient elements which use Z-buffering. Also used is a new kind of light-blue coloured fog, as well as new ambient sounds. The Clan Camp was fully released on 12 April 2011.

The sky can be seen from the Citadels thanks to skyboxes

Draynor Village received a major graphical overhaul on 25 May 2011. With the update, the environment received a darker, nightly, look, with lanterns around. The fog within the area was tinted to dark-blue and the map layout, with NPCs, was changed. To be noted is that the only trees to change were the dead ones.

Another important update was the release of Clan Citadels on 26 July 2011. Other than including new gameplay options for clans, hundreds of customisation options and new graphics, it also introduced skyboxes, which 'surround' the Citadels. Other than that, Citadels may be chosen to have day- or night-time environment.

9 August 2011 saw an overhaul to two popular Misthalin locations - Grand Exchange and Edgeville. While the first one received a major update, making it better-looking and easier to use, the second one received graphical improvements such as visual props and new lighting effects. Also, all young Spirit trees got visually updated and audio improvements were made to magic spells, agility sound effects and few locations, such as Mort Myre swamp, which got ambient sounds. On 17 August the whole Morytania region, including it's swamp and inhabitants, received a major graphical overhaul, along with most trees in free-to-play cities and surroundings.

In the Ritual of the Mahjarrat quest, released on 14 September 2011, there's a cutscene which involves graphics never seen before in-game, similar to ones seen in RuneScape trailer. On 4 October a technical update was released thanks to which the camera angle can be rotated 360-degrees by using the middle mouse (scroll) button.

With the update on 25 October 2011 RuneScape requires Java version 1.6 update 10 to be played, as announced the week before. This is not only required to improve the game's graphics and sounds, but also to fight botting - in fact, the day of the update was called the Bot-Nuking Day. 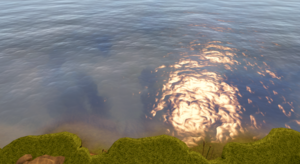 The sea seen from Wizards' Tower

With the same update, in fact, few graphical improvements were released, including new water effects on DirectX mode.

Draw order refers to the order in which players, NPCs and familiars are rendered for a space in the game. 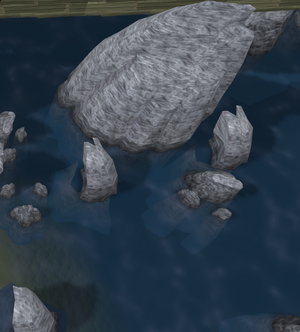 The submerged portion of this rocky outcrop on Harmony Island exists within The Underworld.

The Underworld is a programming term used by Jagex to describe the area visible beneath the surface of water in RuneScape.[1] The Underworld was developed as part of RuneScape High Detail, which included a redesign of the game's water mechanics.

Everything visible beneath a water surface is programmed within The Underworld. Objects such as reeds, boats, rocks, and shorelines are some of the most frequent examples, although many others exist.

Map squares typically have five levels, with the surface usually being level 0 and roofs usually being level 3. Most "underground" areas and dungeons are actually on level 0, but a long distance to the north of the rest of the world (this can be observed using map markers). The Underworld is located on level -1, so as not to interfere with the game's teleportation programming (which usually places players on level 0).

Tweening is a technique to improve animations in RuneScape. Released in Animation Pack 1 in July 2009, it creates a smoother and better-to-look-at animation than before. Originally animations have 25 frames per second however with tweening two frames of animation are interpolated (blended together) to create a third frame in between them. This makes the animation appear smoother to the eye as it effectively doubles the frames of the animation putting them at the game's limitation of 50 frames per second.

Enhanced z-buffering was a major graphical update released on 15 September, 2010.