From the RuneScape Wiki, the wiki for all things RuneScape
(Redirected from Granite rocks)
Jump to: navigation, search
Granite rock 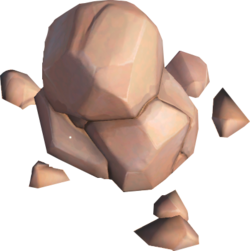 Granite rocks are a type of rock found in the quarry south of the Bandit Camp in the Kharidian Desert. In the quarry, as in the desert, desert heat will continually reduce the player's Life Points unless the player has waterskins in inventory, or is wearing an Enchanted water tiara. Prior to January 2007, no water was required in the quarry. Granite is mainly used for fast mining training through dropping, but is also used for Granite Lobster pouches. There are three types of Granite, 500g, 2 kg, and 5 kg, all rising in price respectively. Using a chisel, granite can be chiselled into smaller chunks, relative to their size, so you'll get ten 500g pieces of granite with one 5 kg piece. This can be a slow, but effective way of making money. Currently, if you chisel a 5 kg rock into 500g rocks, you will gain 3,377, per 5kg rock.

A player must have Mining level of 45 or greater to mine granite, which randomly yields one of the following sizes of granite block:

When granite is mined, the player randomly receives one of the three sizes of granite blocks. When wearing Varrock armour and the armour effect activates, the size of the second block of granite will be the same as the first block. While you are able to get a Critical hit, Granite rocks will not spawn rockertunity multipliers.

There is no way that the player can influence which block size is mined. However, by using a chisel, the player can carve the larger blocks into 500g ones: four 500g blocks from 2 kg, and ten from 5 kg (first by cutting the 5 kg block into two 2 kg and two 500g blocks, and then cutting the 2 kg blocks). 500g blocks are occasionally in great demand because it is as a tertiary component for infusing Summoning pouches, so mining granite, keeping and banking only the 5 kg blocks, and later chiselling them down to 500g can yield many of these small blocks fairly quickly.

Before the mining update of 9 September 2008, larger blocks could not be chiselled into 500g blocks. Jagex adjusted the price of 2 kg and 5 kg blocks from their former prices of 4 and 10 coins to over 4,000 and 10,000 coins, to be in line with the price of 500g granite. Prices have dropped since the update