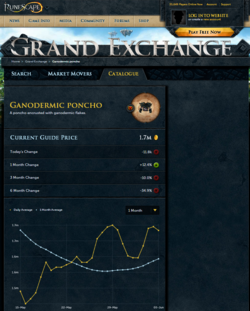 The interface of the Grand Exchange Database

The Grand Exchange Database, very similar to this wiki's own Grand Exchange Market Watch, is a feature on the RuneScape website, allowing players, both free and members, to view price changes of a specific item over the previous 180 days.

There are currently 6,195 items in the Grand Exchange Database.

During the beta phase, items were found on both the price rise and fall lists.

The beta stage of the Grand Exchange Database was released on 15 April 2008.[1] Information on price rises and drops were limited to 5 items, compared to the current list of 10 (and 100) items. Price history charts were fixed to display only the last 30 days of data.

Subsequently, at a later date, the charts were expanded to include charts for 90 and 180 days. The number of items tracked for price rises, price drops, and trade volumes were increased to 100 items.

On 16 February 2010, without an official announcement, the Grand Exchange Database was taken off beta and "released" officially.

On 1 February 2011, free trade was re-introduced into the game and trade limits were lifted.[2] The current market price was reclassified as the "guide price", while minimum and maximum prices were removed. In addition, price restrictions (unofficially called "absolute minimum price" and "absolute maximum price") — where items could not be traded below or above these pre-determined prices — were removed.

Users of the database can search items by choosing the letters on the left or just type the name of the item under the marquee in the "search" box, then select the price range and whether the item is member-only or non-member or both.

Note that the search result may be a little bit sidetracked. For example, "Guthix page" would result in items named with "Guthix" or "page" or are "Guthix"-related. However, wrapping "Guthix page" in quotation marks (") in the search box in the database would result in a more precise search.[3] The yellow and grey stars before the picture of the item in the search results indicate that the items are member-only and non-member respectively.

Users can also list items by selecting the category in the Item Catalogue. Doing this brings up several lists of items grouped alphabetically. The following is the current list of categories used in the database:

Using Microsoft Excel or Open Office Calc, it is possible to track several personalised items at once.