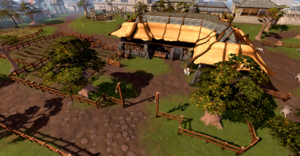 The Gower farm is a farm located south of Varrock where the cabbagemancers Andrew, Paul, and Ian live. It features in the Gower Quest, and hosts various facilities and functions.

The farm is located close to a T-junction, with roads leading to Varrock, the Varrock Dig Site and Lumbridge. There are various methods to reach the farm. 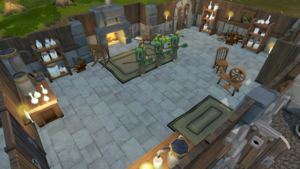 The three Gowers stand inside their house.

While the farm is primarily visited during the Gower Quest, it features a few facilities of its own.

The farm features a pen with Giant rats, which may be used by low-levelled players to train. The rats drop Raw rat meat, which can be cooked for Cooking experience, and bones, which can be buried to train Prayer. The loot may also be sold to the Grand Exchange for a fair price.

In addition to the aforementioned trees, there is a Yew tree and a Elder tree located behind the farm which players with a high Woodcutting level can cut. 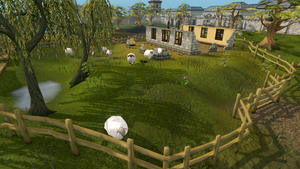 The pen with sheep and a ruined bulding which occupied the area before the release of Gower farm.
This information has been compiled as part of the update history project. Some updates may not be included - see here for how to help out!