From the RuneScape Wiki, the wiki for all things RuneScape
Jump to: navigation, search
Not to be confused with Monkey Guard. 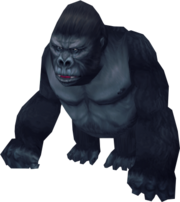 Gorilla guards are monsters encountered during Cabbage Facepunch Bonanza. Players who are defeated in the arena, or are not in the safe zone when the round ends, turn into gorilla guards.

As a player gorilla guard, their aim is to kill the remaining human players. Besides from regular attacking, they can set one trap on a resource each round, which earns 2 points to the trap setter and should a human player attempt to fully gather that resource, they will be damaged instead of healed (however they will still get the usual 2 points). Players in gorilla form can also use the Gorilla Dash ability to sprint 30% more often. Player gorilla guards are impervious to all types of damage, as they do not have an attack option by the human players (however NPC gorilla guards do) and both types of guard do not receive damage from any sort of trap. Human players may stun gorilla guards temporarily by using Stun Guard, which lasts for 5 seconds and has a cooldown of two minutes.