From the RuneScape Wiki, the wiki for all things RuneScape
Jump to: navigation, search
Golden Zamorak godsword (passive)? (edit)

The passive is perhaps more useful when trying to keep an enemy frozen for as much time as possible, for example when countering rangers who farcast using the Binding Shot ability. The special is more useful when the bind need to be at an exact time and/or coupled with a strong hit, such as preventing a flag carrier from running away in Castle Wars or someone from running away in the wilderness. A freeze for melee is more useful than it sounds, because when a melee user chases after a running enemy, the melee user cannot even use any abilities, as the game would simply say the target is too far away even when the target is close enough to be autoattacked. 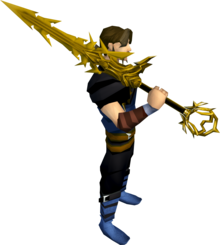