From the RuneScape Wiki, the wiki for all things RuneScape
Jump to: navigation, search
For other variants of this item, see non-golden, lucky.
Golden Armadyl godsword? (edit)

The Golden Armadyl godsword is a limited edition variant of the Armadyl godsword won from Balthazar's Big Raffle. It is identical in function to the regular godsword, including the ability to swap its special attack for the passive effect.

If this item is not protected and lost in the Wilderness, it will turn into an Armadyl godsword.

The Golden Armadyl godsword has either a special attack or a passive effect, of which only one can be active at a time. The player can switch between the two by using the godsword on the altar in the God Wars Dungeon in the room where Kree'arra and his minions are, however entering Armadyl's Eyrie requires 70 Ranged.

The special attack is called Armadyl's Judgement, which deals up to 250% damage and uses 50% adrenaline/special attack bar. However, the description has not been updated since the Combat beta's release in January 2014 and this special attack's damage has been tweaked many times since. Test results (critical hit of 5427 at an ability damage of 1460 and no other boosts) suggests the special actually deals up to 372% damage. Under Legacy Mode, the damage is slightly higher to compensate for the larger time interval between attacks.

The Golden Armadyl godsword (passive) is made by using the godsword on the altar in Kree'arra's room in the God Wars Dungeon. This makes it lose its special attack, but gives it a passive effect that has a 25% chance of activating upon a successful hit: it raises the wielder's Attack and Strength levels by 1 each time, for up to 10% of the wielder's levels. However this passive is fairly unpopular as the boost does not stack with potions and so does not provide any damage boosts, unlike the special attack. 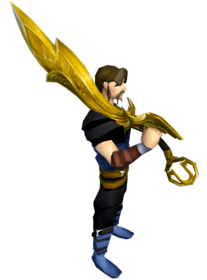 The update history project is a work-in-progress – not all updates to this topic may be covered below. See here for how to help out!
Retrieved from ‘https://runescape.wiki/w/Golden_Armadyl_godsword?oldid=33929637’
Categories:
Hidden categories: