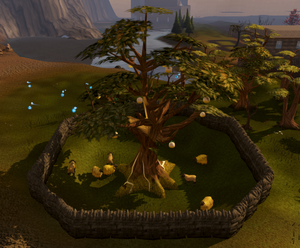 The golden tree is a tree south-east of Rellekka and south of the entrance to Keldagrim, marked on the world map as Golden Apple Tree. It is gold in colour, with golden sheep underneath it. It is owned by the troll Lalli and has a wall surrounding it preventing access.

During The Fremennik Trials quest, players must get a golden fleece to make the lyre. They need to exchange rock soup with Lalli in order to gain access. Apart from this, the tree has no use.

Players who have started A Fairy Tale II - Cure a Queen can quickly access this location by using the fairy ring code ajr. Other options include the Fremennik Province lodestone and a ring of slaying which teleports to the same location as the fairy ring.

The tree's examine text is "Those golden fruit look good enough to eat!"