The god series is a series of quests centered around the Gods returning to Gielinor following the assassination of Guthix and the nullification of his Edicts.

Immediately after, a shadowed figure claiming to be Guthix appeared. He quickly revealed himself to be the Zarosian Mahjarrat Sliske and that Guthix was sleeping deeper into the temple. He also stated an alarm was set off, which would alert the other gods' factions, prompting them to enter the temple for their own gods' gains. 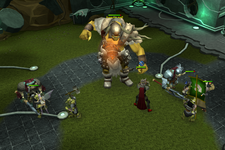 Graardor, one of the invaders of Guthix's caves

The other gods' factions began to arrive, including the Zamorakians and the Bandosians. The adventurer defended the sleeping Guthix and fought off K'ril Tsutsaroth, Enakhra, Zemouregal, and Graardor, who all fled the temple after their defeat. Zilyana's forces then raided the temple, but were soon pushed back by the adventurer. 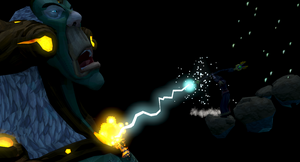 Sliske, dealing a killing blow to Guthix with the staff of Armadyl

The Zarosians arrived, including Azzanadra, Akthanakos, Wahisietel, Nex, and Char. Suddenly, the entrance to Guthix's resting chamber broke open, prompting all participants to rush through. The adventurer got to Guthix at the end of the temple first. Sliske, however, appeared with the Staff of Armadyl and struck a fatal blow to Guthix, after which he quickly disappeared.

Before he died, Guthix told his history to the adventurer, and named them the World Guardian, which came with a power; being immune to the power of the gods.

Immediately after Guthix's death, Saradomin returned to Gielinor, arriving in the temple, teleporting the Zarosians away. The World Guardian warned Saradomin that the world was still protected. Saradomin then teleported away with Zilyana to make plans for when the other gods return to Gielinor.

The Death of Chivalry[edit | edit source]

Main article: The Death of Chivalry

Sir Owen was stationed at the Edgeville Monastery awaiting a certain contact to arrive. When the adventurer arrived, Owen believed they were the contact, but he was surprised to find it was actually the god of order, Saradomin. Saradomin sent Owen and the adventurer to infiltrate the nearby Black Knight's Fortress, to prevent the Kinshra from using a powerful weapon that has recently been discovered, last used during the God Wars.

Upon entering the portal, they arrived at an ancient Saradominist crypt, only to discover some Kinshra soldiers attacking a helpless woman. The soldiers were swiftly dealt with by the duo, who proceeded to free the woman. She then explained to them that the powerful weapon Saradomin was talking about was sealed away deeper into the crypt.

The adventurer and Sir Owen continued down and encountered a ghost centaur, by the name of Fern. She revealed that the weapon is the Wand of Resurrection and that she only allows those who are worthy to pass. The adventurer defeated Fern in a fight, allowing them and Sir Owen to proceed. 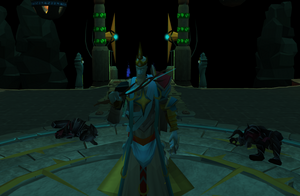 Saradomin with the Wand of Resurrection

The duo arrived at the Wand of Resurrection, only to find it sealed off by a mysterious barrier. They managed to retrieve the wand after a series of tasks, only to be confronted by the woman they saved, who turned out to be a Zamorakian named Dawn. Dawn proceeded to kill Sir Owen, after which, The World Guardian fought and killed Dawn and retrieved the wand. Saradomin then appears and requests the wand to revive Sir Owen. The adventurer either willingly hands Saradomin the wand, or resists. Either way, Saradomin retrieves the wand, and revives Sir Owen, but corrupts his arm in the process.

After investigating the massacre of a group of Saradominist Priests with the assistance of Ichtlarin, the adventurer learns of the disappearance of Death. With an invitation to 'Sliske's Grand Ascendancy', the player and Ichtlarin travelled to Armadyl's Empyrean Citadel. There, they found themselves among many followers of different gods, including Azzanadra, Wahisietel, Zemouregal, K'ril Tsutsaroth, Commander Zilyana and General Graardor. The followers were unable to enter the main room of the citadel, where several gods had gathered to witness Sliske's ascension. As Ichtlarin entered the main room, the adventurer is denied access and chooses to explore the rest of the citadel. 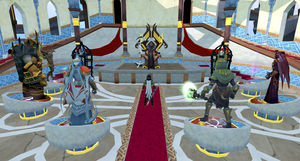 Through several windows in the citadel, the player was able to watch the events in the main room unfold. Saradomin, Zamorak, Bandos, Armadyl, Ichtlarin and Brassica Prime argued over their philosophies in a hostile manner.

As the adventurer progressed through several challenges, they eventually earned an invitation to the Ascendancy. After entering the main room, Sliske revealed that the ascendancy was a ruse and that his place was to assemble all of the gods together. As the gods decided that they would kill Sliske, he revealed he had kidnapped Death, as well as the Dragonkin Strisath, and that he would kill Death and release Strisath on the False Users if he was attacked. After recounting how Sliske came into possession of both the Catalyst and the Siphon, he declared his end-game; a god-killing contest, where the victor would receive the Stone of Jas.

Fate of the Gods[edit | edit source]

Main article: Fate of the Gods

Azzanadra met the adventurer at the World Gate to inform them the return of Zaros was near. Zaros required the adventurer's assistance to create a new body to return to Gielinor. The adventurer travelled to the plane of Freneskae and after encountering many dangers, they discovered Zaros, next to a sleeping elder god, Mah. 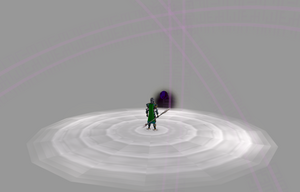 Zaros speaking with the World Guardian

Here they learned many things about Zaros and his objective upon his return to Gielinor. They are also informed of the 'Great Revision,' where the elder gods awaken from their slumber and set out to destroy all planes in order to create new ones. Finally, they learned of Zaros' plans to ascend to elder godhood, to stop the Great Revision from happening.

After defeating creatures created by Mah's nightmare, the adventurer chooses to craft a body for Zaros, either one made from dark energy, allowing Zaros to return at full strength, or one made from light energy, allowing Zaros to return, but in a very weak state. Back on Gielinor, Zaros excommunicated Sliske for the murder of Guthix and creation of the god-killing contest. He also assigned Char to keep an eye on Sliske, Nex to monitor the gods, and Azzanadra to find the resting place of the elder gods. 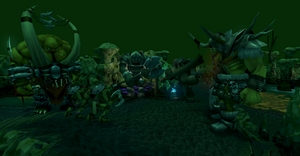 Notable Bandosians in the Lumbridge Caves

Following his defeat in the Battle of Lumbridge, Zamorak assembled a team of allies and followers to steal the Stone of Jas from Sliske. After recruiting a team of Zamorak's strongest followers (and making use of their wide variety of skills) the adventurer made the choice of either aiding Zamorak, Sliske, or remaining neutral. Regardless of the player's decision, Zamorak is returned to his old strength and Sliske teleports away with the Stone of Jas.

Main article: The Light Within 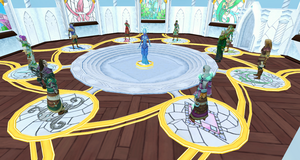 Seren with the Elven clan leaders

The eight Elven Clan leaders decided it was best to restore Seren, after the imminent danger to Prifddinas. They enlisted the help of the World Guardian, who successfully managed to retrieve the shards needed to restore Seren. However, it was not enough. Seren lacked a soul. The World Guardian took Seren to Freneskae through the World Gate, where they encountered Zaros, who gave the World Guardian the information they needed to acquire Seren's soul. Seren then returned to Prifddinas, declaring that the Elven clan leaders remain the leaders of the crystal city.

Main article: Nomad's Elegy
This section is a stub. You can help by expanding it.

Main article: Children of Mah
This section is a stub. You can help by expanding it.