From the RuneScape Wiki, the wiki for all things RuneScape
Jump to navigation Jump to search
The Old School RuneScape Wiki also has an article on: osrsw:God book
For other uses, see God book (disambiguation).

God books are Prayer items held in the pocket slot. Players first receive a damaged book after completion of Horror from the Deep and must add four torn pages to make a complete god book, which requires level 30 Prayer to equip. Once added, pages cannot be removed from the book.

God books and illuminated god books can be charged with torn pages to have unique special effects that activate in combat. 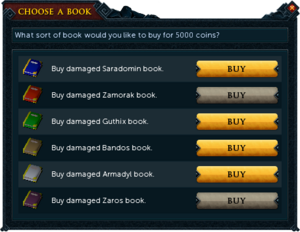 Interface for choosing a god book from Jossik

During Horror from the Deep, players speak to Jossik about a rusty casket, and he asks the player to read what the chest says. The player can choose from six gods: Saradomin, Guthix, Zamorak, Armadyl, Bandos, or Zaros (access to the Ancient god book requires completion of The Dig Site quest). The rest of the books can also be purchased straight after for 5,000 each.

For whichever god is chosen, the player will get a "damaged book" of that god. When wielded, this book provides a +2 boost to Prayer. However, this is not the book's true potential; torn pages that are missing from the damaged book can be found and put back in to complete the book. Torn pages are a reward from completing treasure trails, cremating vyre corpses in the Columbarium, completing Tetracompasses, or by buying them from other players, either directly or via the Grand Exchange.

If a player loses their god book, they can get it back in their player owned house for 100,000. If you lose your damaged book you can obtain it from Jossik for free. (He will return only one book each time he is spoken to, always in this order: Saradomin, Guthix, Zamorak, Bandos, Armadyl, and Zaros.) Jossik now has a menu to purchase god-books from, used to buy a specific book without purchasing all books in order. All books must be reclaimed from him before a new book can be bought. Completed or illuminated books can also be reclaimed from a bookcase in a player-owned house.

After One Piercing Note, all completed books can be illuminated, creating a copy with increased bonuses and an additional +2 Prayer boost (to a total of +4). Illuminating a book requires level 60 Prayer and Crafting and gives 10,000 Prayer and Crafting experience the first time a book is illuminated (for a total of 60,000 experience to each skill for all six books). The illuminated books require level 40 Prayer to wield and cost 120,000 coins to reclaim if lost.

Since 21 August 2017, completing the god books unlock cosmetic overrides for them. Each completed god book unlocks the respective recolour option, and once all have been unlocked, ten further recolours become available along with the optional use of prismatic dyes.

The Elder God books, known as scriptures, are drops obtained from defeating the respective general's leading their "front". They can be obtained from both normal and hard mode encounters. The scriptures and the pages used to recharge them can be bought from the Grand Exchange. Pages can also be dropped from the common mobs from each front.

God books and illuminated god books have a passive effect that can be activated or deactivated in combat, similar to a scrimshaw, which is unique to each god. This effect needs to be charged and is done by using the corresponding god page on a complete god book, each page adding a 45 minute (25%) charge. The maximum charge (time) you can have is 3 hours. The page number does not matter, so long as the page is for the same god. The effects are unchanged for illuminated books.

If the player loses the book, it will lose all its remaining charges, requiring the player to add additional pages in order to activate the passive effect.

All effects have a 1/15 (6.6)% chance to occur with each hit (50% in legacy) and have a 15-second (25-tick) cooldown after activating before it can activate again. They deal 60% fixed plus 40% randomly (20% fixed and 40% randomly in PvP combat) of the maximum damage numbers (this is incorporated into the ranges given). The damage dealt is a percentage of ability damage in EOC and legacy mode. Damage boosts that are applied during damage calculation (for example, ultimate abilities, prayers, Void knight equipment, and the Slayer helmet) do not affect the god book's special effect. Damage boosts applied after damage calculation (such as auras, Keris, Darklight, and Balmung) will affect the god book's special effect.

A shockwave hits the target, dealing 90-150% damage (PvP: 30-90%), reducing the target's Defence level by 5% + 5 and increasing its affinity values by 3 for 12 seconds. Based on General Graardor's ranged attack.

A dark explosion hits the target and the surrounding targets in a 3x3 area for 150-250% damage (split over all targets) (PvP: 50-150%). Based on K'ril Tsutsaroth's prayer smash mechanic.

A beam of ice slams down on enemies, dealing damage in a 3x3 AoE for 3.6 seconds. After targets have been attacked by the beam for a minimum of five times, it shatters for 400% ability damage. Based on Arch-Glacor's Pillars of Ice mechanic.

While gaining experience in non-combat skills, a catalyst of alteration can appear much like how seren spirits and divine blessings. When interacted with, they give 1-3 clues of any tier, ignoring soft caps and provide a 5% experience buff for 1 minute.