From the RuneScape Wiki, the wiki for all things RuneScape
Jump to: navigation, search
Scoreboard? (edit) 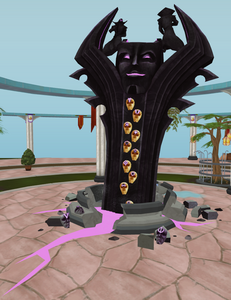 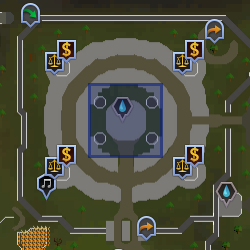 The God Scoreboard was a giant scoreboard resembling a darker version of the Sword of Edicts, located in the middle of the Grand Exchange in Varrock. It was created by Sliske in order to get the people of Gielinor talking about his game, which had progressed slowly since its announcement at his Grand Ascendency. The scoreboard updated with relevant god kills throughout the release of the quests involved in the Sliske quest series.

The scoreboard featured various masks each representing a god (along with Vorago under The Godless banner, Sliske himself and the World guardian). They were displayed from first downwards, with dead god's masks scattered on the floor. If a player checked the scoreboard, they could see a detailed breakdown of each god's kills, wins, and losses. Originally the score was kept on the most kill, but was later change into wins, with god kills being the highest score total. Only those that were invited to Sliske's End game featured on the Scoreboard,[1] kills of and significant victories against uninvited gods were still counted.

Each week, players could collect 50 Sliskelion pieces which rewards a Sliskelion XP lamp when taken to the scoreboard.

The scoreboard, along with the Sliskelion pieces, were removed with the release of Sliske's Endgame.

Prior to its removal, the scores were as follows (as of Children of Mah):