From the RuneScape Wiki, the wiki for all things RuneScape
< God Emissaries
Jump to navigation Jump to search

These are tasks given by God Emissaries. God emissary tasks can only be completed on a members' world.

Combat tasks give experience in Combat skills such as

Defence. Completing them all rewards the ability for the God banner to boost any combat skill by five levels for 30 minutes every day.

The first combat task is to kill 10 goblins. These can be any standard goblins, and an area with many of them such as near Port Sarim, Goblin Village or Lumbridge is advised. On killing the final one, you will automatically receive a message fragment in your inventory.

Kill White or Black Knights until one drops a message. White Knights can be found in Falador in the White Knights' Castle, while Black Knights can be found in the Black Knights' Fortress north of Ice Mountain and at the south end of the Taverley Dungeon. If you wish to kill knights in the fortress, a disguise is required to enter unless you enter via the Skull of Remembrance. Julienne assigns you to kill black knights, Moldark assigns you to kill white knights, and all other emissaries give the choice of either type of knight.

You will be tasked with challenging the soldiers in Yanille for 3 minutes. To start the challenge, you must stand on the flower bed south of Bert's house and then contact the emissary on your god banner - choosing "Start diversion". Within the 3 minutes, you will fight incoming soldiers in an isolated scene. If you kill a soldier, a new one will teleport in. One easy way to finish this task is to bring 6-7 pieces of food and unequip your weapon (or use any fun weapon such as a rubber chicken), so that you stay in combat longer. You do not need to kill a certain number of soldiers, just stay in combat and survive for 3 minutes. Turning auto-retaliate off without retaliating back does not complete the task.

Kill Kalphite Workers until one drops a curved artefact. Kalphite Workers are found inside the first level of the Kalphite Hive in the Kharidian Desert. The hive requires a rope to enter for the first time, but is not required thereafter. The hive can be reached relatively quickly by using the fairy ring biq, or simply by heading west from Shantay Pass.

Kill jogres, demons, and blue dragons until they drop 5 jogre talismans, a demon horn and a perfect blue dragon scale. A number of demon varieties work, and baby blue dragons count for the dragon task. It is recommended to kill baby blue dragons and lesser demons in Taverley Dungeon and jogres on Karamja near the Shipyard. 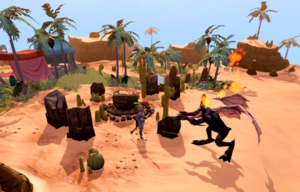 The black demon from combat task 6.

Empower the prepared curved artefact to create an empowered curved artefact. To do this you must go to the fire altar ruins north of Al Kharid. When there, use it on the ruins and a black demon will appear. The demon is as tough as a standard black demon and attacks with magic, so melee is unadvised. It is weak to ranged, and drops nothing. Afterwards, the artefact will be empowered.

If you have a pet with you during this task, you will be "forced to abandon your fight with the demon before the ritual is complete." Also, if the black demon appears and then immediately disappears, stand further from the altar. If this happens, you will see a message telling you to use the artefact on the altar again. Move further away first.

A player lighting a bonfire in order to contact their god's agent.

Skilling tasks give experience in

Magic. Completing all of them will give the god banner the ability to boost any of the above non-combat skills by two levels for 30 minutes every day.

Make 3 bowls of scrambled eggs or smith 3 bronze 2h swords yourself. The scrambled eggs can be made by adding an egg to a bowl and then cooking it on a range.

Gather 5 metal fragments whilst Mining, Woodcutting, or Fishing on resources of skill level of 30 or higher. The following resources count:

There may be a glitch with this task where no fragments are gathered when mining, woodcutting, or fishing. Going into the lobby and then back into a world should fix this. 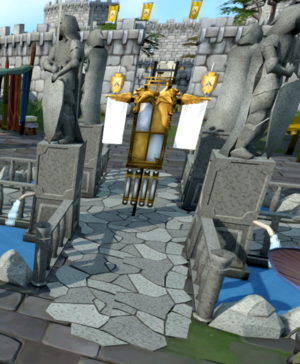 Light bonfires by using logs on your banner (for Firemaking experience) or place large flags (for Crafting experience) to contact your god's agents (a woman will appear). This must be done in Rimmington Square, Draynor Marketplace, Varrock Square, and Ardougne Marketplace (a chatbox will pop up once in the correct place). Lighting a bonfire requires 4 logs (of the same type) and 40 Firemaking. Building flags requires 4 strips of cloth and 40 Crafting - with the cloth and banner in your backpack, use the cloth on the banner. You will need 16 logs or 16 strips of cloth in total. Bolts of cloth also work, however a combination of strips of cloth and bolts of cloth does not work. Protean logs do not work, but Corrupted magic logs does work for the Firemaking variant.

Exploration tasks give experience in

Agility. Completing all of the tasks will give the god banner the ability to boost Agility by five levels for 30 minutes every day.

Ask vendors to sell armour to your emissary by visiting a helmet shop, platebody or chainbody shop, plateleg shop and shield shop.

Find 8 Strange fragments, which can be found scattered around various locations and will show up on the mini-map as dropped items (red dots). If you are less than 20 Agility you will only receive 500 experience as a reward.

Use your god banner on 4 prayer altars. The following altars work, however success varies from player to player based on the god they've allied with. For example a Saradomin altar will not work for a player receiving the task from an Armadyl emissary. If not, try going closer to the altar. You will need to be level 30 in Agility in order to claim the full 3,000 experience reward for this task. Lower Agility levels will receive partial awards (e.g. 2,000 at level 29).

Make an empowered strange artefact by visiting the Fire & Water; Air & Earth; Body & Mind altars and using the strange artefact on them (without the need to go inside). You need to draw power from the ruined altars on Gielinor's surface. This must be done in pairs (separated by semicolons above). Within each pair, only 90 seconds are allowed to travel. There are no time limitations between pairs. The order you do an altar in a pair does not matter (e.g. you can do the Water Altar before the Fire Altar) - similarly you can do the body-mind pair before the air-earth pair. These are some of the quickest methods:

In each case, it's only necessary to have a way of reaching one altar in the pair within 90s, and it's possible to complete each pair by using the home teleport and running from the lodestone closest to one of the altars.

You will need to be level 50 in Agility in order to claim the 7,500 experience reward for this task.

The easiest way to do this if you have the Runecrafting teleport tablets that go directly to the Runecrafting altars you need. This is faster than the wicked hood method as the tablets are one-click teleports, whereas you have to go through an interface while using the wicked hood. The wicked hood has a limited amount of teleports, meaning other items must be used to reach all of the altars or use of a Wicked hood teleport token which recharged the teleportation number of your Wicked hood. Even though the altar teleport tab method is slightly quicker, and can be used to reach all of the altars, it is not recommended due to the amount of time it takes to obtain the teleport tabs, and the level 50 Runecrafting requirement for the Great Orb Project minigame, required for buying the tabs.

One of the simplest and fastest routes is as follows. It requires two teleports on the wicked hood, a Varrock teleport or a ring of Wealth, and a ring of duelling.

Begin at the Water Altar (teleport to Lumbridge/Draynor and run there). Use the helmet on the altar and teleport to the fire altar via ring of dueling (Duelling Arena option).
Then run to the earth altar near the Varrock Dig Site (several possible methods including the gnome glider network, a Varrock Dig Site pendant, balloon network or Varrock lodestone), activate it with the helm and teleport to Varrock using the level 25 Magic spell or GE teleport on the ring of Wealth, run to the air altar.
Finally, use the remaining two charges on the wicked hood to teleport between and activate the body/mind altars, Alternatively go to the body altar and teleport to Falador before running north to the mind altar or using the wicked hood teleport. A third option is to first visit either altar, then just comfortably run north around the mountain and to the opposite altar. The whole event should take you just a couple minutes.

Completing the tasks completes the On a Mission from...the Gods achievement which is a requirement for the master quest cape.

This information has been compiled as part of the update history project. Some updates may not be included - see here for how to help out!
Retrieved from ‘https://runescape.wiki/w/God_Emissaries/Tasks?oldid=35688047’
Category:
Hidden category: