From the RuneScape Wiki, the wiki for all things RuneScape
(Redirected from Goblin raids)
Jump to: navigation, search

Goblin Raids is a free-to-play feature in Gielinor that was released on 17 October 2012. Every thirty minutes, a server-wide announcement goes out detailing the latest location of a goblin raid. Players work to repulse the Goblin Raiders led by Hollowtoof in this activity.

To receive a notification in chat about a raid, one must have the filter option enabled in the "Game" tab. High-levelled players (around level 90) must enable "Goblin Raids" under "Settings -> Gameplay -> Messages & Social -> Notification Messages". You can also turn on this notification by the NPC Doomsayer, he is located just north of the Lumbridge lodestone. If a raid starts and your notification is turned on you get the following notification: "News: Goblins are constructing a raid at (reference location)". Also a special icon of a goblin face appears on the player's map, and another icon for the guards appears after the event finishes in the same place.

Note that the more crowded the world is, the lower the chances are to slay one of the raiders and get some rewards in the process. The chances are even worse when competing with a player with higher levels. 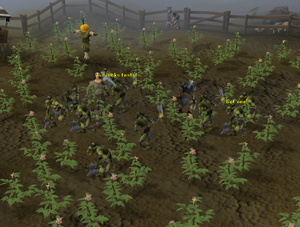 When there is a raid, Goblin Raiders appear at the place indicated by the message. These raiders shout various phrases such as "Got one!" and "I got a ...". Each time they shout this, one raided drop (logs for a wood-gathering goblin and seeds for a goblin on a farm) is added to that goblin. When it is killed, they drop all of these, as well as the common drops of a Goblin. For example: a goblin that has said something three times could drop two logs and one oak logs from their inventory and bones and a goblin mail from their normal drop table.

Players must kill all of the raiders in order to fight Hollowtoof. As they are not aggressive, you can kill them one by one. All raiders along with Hollowtoof only use melee and they could be quite tough for low to medium level players, so it is recommended to safe spot them if possible. They are weakest against Magic. They also have a small wander radius and would retreat when attacked out of it, so it is possible, with a long attack range (any Magic spell, shieldbows with shieldbow sight), to pin them on an obstacle while they are retreating.

After all the raiders are defeated, Hollowtoof shouts one of the following lines:

He becomes an attackable NPC who can be killed for Raider equipment. With combat level of at least 45, you can talk to him, with or without killing the other raiders, to intimidate him into giving you the raider equipment without a fight. However, he will need to be killed for a chance to earn the Gud Raider equipment. Be sure to bring good combat equipment and food because Hollowtoof is much stronger than his combat level suggests, and can frequently hit players with over level 90 combat stats in full rune armor.

Commander Yodri and his Black Guards will automatically teleport to the site after approximately thirty minutes if the raid hasn't been defeated, causing the raiders to flee the scene and start a raid on another site.

The goblins drop low-level skilling materials. For everyone who participated in the onslaught, Commander Yodri appears and gives players an item from the Dwarven Black Guard's store for every goblin slain. He does not hand out any reward for those who only damaged Hollowtoof and none of the other goblins. Commander Yodri's rewards are based on the location of the raid, and the amount scales with the amount of raiders the player has killed:

If the player is high-levelled, during the activity, they can speak to Hollowtoof before all the goblins are killed to receive the Raider equipment set. Players can kill Hollowtoof for a chance to receive Gud raider equipment, the strongest non-degradeable melee armour available to free-to-play. After the raid, when Yodri and his crew are there, a special icon of a dwarf face appears on the player's map. Players will often receive the low-level Raider equipment as a drop, and the chance of a Gud raider item seems to be separate. In particular, one can receive both types of drops in the same kill, and it appears that all players that attack at least one Goblin and Hollowtoof have a chance for a Gud raider item.