From the RuneScape Wiki, the wiki for all things RuneScape
Jump to navigation Jump to search
The Old School RuneScape Wiki also has an article on: osrsw:Underground Military Glider Hangar

The Gnome glider hangar or Underground Military Glider Hangar[1] is a secret military hangar located under the Gnomeball pitch.[2]It is accessed during and after the quest Monkey Madness by talking to Daero. The player travels there from the Grand Tree, and can travel to Crash Island, which can be used to access Ape Atoll.

Halfway during Monkey Madness, the player is taken by Daero to this underground military hangar, which was previously planned to be used as one of the launch sites for Glough for his domination plan.[3] Here, the player meets up with Waydar, who explains to Daero that the 10th Squad's standard gliders must have been blown away by the tropical weather, whereas he would be using a superior, refined version in hope of locating them.[4]

Glough has set up a mechanism in the facility which shuts down the power periodically, and it must be re-initialised to deploy these military gliders. To bring back power to the hangar and allow the military gliders to fly, a slider puzzle must be solved on the Reinitialisation Panel.[5] 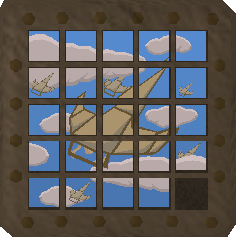 Speak to Daero and begin the puzzle by clicking on the panel in the south-eastern region of the hangar, in front of the long pipe. The objective is to rearrange the scrambled tiles to create a complete picture. There are two choices to complete the puzzle:

During and after the quest, the hangar can only be accessed by talking to Daero on the 1st floor[UK]2nd floor[US] of the Grand Tree, in Blurberry's Bar. He blindfolds the player and transports them back to the hangar.

Players can leave the hangar at any time using the teleportation device at the hangar's south end, click operate on the south part of the device. This will drop the player off near the west side of the Tree Gnome Stronghold. This is the same location that players are taken to when they ask Waydar to leave when on Crash Island. Players can also talk to Waydar in the hangar to be transported to Crash Island.

Regardless of whether the player solved the puzzle themselves or paid Glough to do it, they're now ready to fly south. During the quest, the player needs to first speak to Daero, and then to Waydar – who reminds the player to stock up on food and anti-poison before leaving.

After the quest, the player can right-click/long press Waydar to travel directly to Crash Island. Once on the island, players can talk to Lumdo to use his boat to go to Ape Atoll.