From the RuneScape Wiki, the wiki for all things RuneScape
(Redirected from Gnome glider (Gnome glider hangar))
Jump to navigation Jump to search
Not to be confused with Gnome glider.
Gnome Glider? (edit) 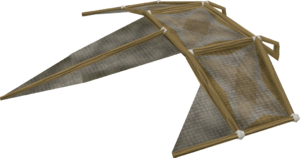 Gnome Gliders are specialized military versions of gnome glider s that are located in the Gnome glider hangar which is accessed during the quest, Monkey Madness. They can only be examined, though they are used for transportation to Crash Island, as well as back to the Tree Gnome Stronghold. The only way to reach these gliders is to speak to Daero in Blurberry's Bar. Once spoken to, Daero will blindfold the player and take them to the hangar if they have reached a certain point in Monkey Madness.

Gnome military gliders are used by the gnomes for combat situations. Due to their lack of protection, however, they are not usually used for combat, but instead for scouting missions. How the gliders differ from regular models is unknown; they bear no weapons and no extra protection. They are most likely used for symbolic purposes rather than for increased functionality. For instance, the 10th Squad is known to have used military gliders to reach the Shipyard in eastern Karamja, a mission that did not involve any combat.

During Monkey Madness, a player must use a military glider to reach Crash Island, a remote location found in the mysterious Southern Sea. From here it is possible to travel to the dangerous island of Ape Atoll. After the quest is completed, the glider can still be used to reach Crash Island.

After beginning Monkey Madness you are able to talk to Daero at Blurberry's Bar in the Grand Tree. He will be able to take you to the secret military glider hangar.

From there you will need to speak to Waydar who will fly you to Lumdo on Crash Island who, in turn, will take you to Ape Atoll in his boat. Speaking to Waydar on Crash Island will drop the player off south of the gnomeball pitch in the Tree Gnome Stronghold (You can also leave the hangar using the teleportation device located towards the hangar's south end, leading to the same point south of the gnomeball pitch).

The glider on Crash Island is the subject of a Sandy Clue Scroll clue: Dig infront[sic] of Waydar's prized possession. 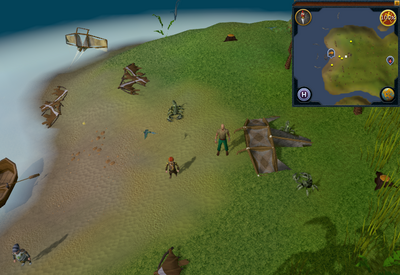 Dig on the west side of the Gnome Glider on Crash Island.