Gnome Restaurant, also known as the Aluft Aloft Gnome Food Delivery Service, is a minigame that involves the art of gnome cooking and delivering this food to various customers as quickly as possible. The minigame is run by Aluft Gianne Jr on the 1st floor[UK]2nd floor[US] of the Grand Tree, in the Tree Gnome Stronghold. 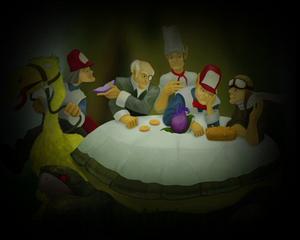 Players start by speaking to Aluft Gianne Jr in the Grand Tree. He is located north of the bank on the west side of the 1st floor[UK]2nd floor[US]. Level 29 Cooking is required to play this minigame. Before starting, players are introduced to the art of gnome cooking and Gnome cocktails in the form of a small tutorial. Aluft Gianne Sr, located one platform east of Aluft Gianne Jr, will get the player to prepare four different gnome dishes. Blurberry is located on the same floor, but in the south-east section of the tree. He will get the player to prepare four different cocktails.

Once players have completed the cooking and cocktail-making introduction, they can start running a delivery service around Gielinor. Aluft Gianne Jr will give the player a new task in the form of a delivery box. The player may choose an easy task, which involves a delivery in or around the Grand Tree, or a hard task, which could be anywhere in Gielinor. Easy tasks have a time limit of 6 minutes, whereas hard tasks have a limit of 11 minutes. Players can click the delivery box at any time to refresh their memory about the required food and destination.

A player can choose not to accept a hard job, but there is a 5 minute and 30 second waiting penalty before they can get another hard job. Although most players wait this time out, it is actually about twice as fast (depending on the customer and the requested food) to do an easy job then return for another hard job.

The delivered food has to be prepared by the player; premade items (bought from the restaurant or bar) do not work and cannot be used. However, the player-made food items can be bought from the Grand Exchange, but some items take a while to buy. The tangled toad's legs dropped by warped tortoises, tortoises, and warped terrorbirds may be used when this particular item is requested for delivery, saving time/ingredients or money (from not buying them) if collected when killing them. However, it is not required to prepare each food item or drink separately after receiving a new task. In other words, players can prepare several of each of the 20 possible items beforehand and store these in their bank. Since Aluft Gianne Jr is very close to a bank, almost all deliveries can be done in only a few minutes time, which increases the chance for receiving a good tip.

Here is a quick reference table for the gnome recipes: 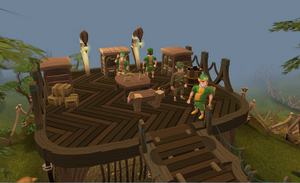 In order to complete all the orders with ease, the following quests are strongly recommended:

Having a Magic level of 66 is required to reach Professor Imblewyn (can be boosted).

Completion of the following quests and tasks can help in making deliveries faster:

For each delivery, one or three reward points are obtained, depending on the difficulty of the delivery.

Getting some food delivered.

Reward tokens offers players the possibility to order gnome food items themselves. However, the type of food offered is completely random, and the items cannot be chosen individually. Players will need free inventory spots to hold the food.

The sous chef's outfit parts are awarded to players that don't already have a full set (including ironmen). An outfit piece may be awarded in addition to one of the tips above; however, it is not always guaranteed. The Sous chef's toque add-on is only able to be received once the full set has been completed.

Finishing a delivery rewards Cooking experience equal to the experience that was received for cooking the delivered item.