Gnome Liaison Officer, often seen abbreviated as G.L.O., is a diplomatic title held by some ambassadors of the Gnome Empire. The position was established in the recent Fifth Age, during the reign of King Narnode Shareen, as a means of coordinating commerce conducted between gnomes and other races,[1] the most frequent of which were humans.

The title of Gnome Liaison Officer was created by Glough, at the time the Chief Tree Guardian of the Gnome Stronghold and head of the Royal Guard, the primary military force of the Gnome Empire. The creation of the title appeared to occur in response to the Empire's increasing desire to foster diplomatic relationships with other races in Gielinor, which had been largely ignored up until the recent Fifth Age.[2] In reality, however, its creation was part of an elaborate plot by Glough, who intended to create a war between the gnome Empire and humanity, particularly Misthalin, Asgarnia, and Kandarin.

The only known Gnome Liaison Officer observed in-game is G.L.O. Caranock, a close friend of Glough who ultimately becomes a primary antagonist in the Gnome quest series, particularly the Monkey Madness quest. However, according to Daero, multiple Gnome Liaison Officers serve the Gnome Empire, even after Glough's ousting from office during The Grand Tree quest.[1]

In the years prior to the establishment of the Liaison Officer position, there existed very little friendly commerce between the gnomes and other races in Gielinor. Following the race's resurfacing during the Great Migration after the God Wars, the race remained largely isolated, apart from a brief friendship with elven settlers led by the Cadern Clan. The late Fourth Age saw the Golden Age of the Gnomes under King Healthorg. During this period, the Gnome Empire prospered immensely; however, interaction between the gnomes and other races remained virtually non-existent, and the Golden Age itself would rapidly decline following Healthorg's descent into old age. Anti-human sentiment was strong for years after Healthorg's death.

As the gnomish race began to recover from its decline, a divide between gnomes in favour of pursuing diplomacy and those against it made itself apparent. Issues such as the gnomes' conflicts with the Mahjarrat General Khazard would slow this process, but ultimately by the modern Fifth Age the gnomes' call for diplomacy would see the expansion of the race's role in Gielinor.

Establishment of the position[edit | edit source]

As the Empire began to interact with other races, the gnomish military leader Glough deemed it necessary to maintain strict regulations in regards to diplomacy. This would ultimately culminate in the establishment of Gnome Liaison Officers, who were hired to help coordinate large-scale interaction between races. Officers were hand-picked by Glough,[3] a decision that is not known to have drawn criticism despite its implications. Under Glough's direction, officers supervised much of the Empire's diplomacy, primarily in foreign regions. Some of those hired, such as G.L.O. Caranock, had little to no history in gnomish politics; at one point, when questioned about Caranock, King Narnode Shareen claimed to not even know the name.

Although Officers were officially meant to regulate diplomacy for the good of the Gnome Empire, the position was abused by Glough, who selected Officers who shared his strong dislike for the human race. As a result, Glough was able to, to an extent, manipulate the Empire's diplomatic policies to suit his own extremist viewpoint.

Although Liaison Officers did oversee much of the Empire's major diplomatic movements, more minor commerce was not generally regulated by them. According to a Varrockian research paper titled Gnomic Negotiations, one human was allowed to speak with Dr. Darius Gnomalus, the head of the Gnome Institute of Knowledge, in an open, unregulated fashion during the height of the officers' power.[2] 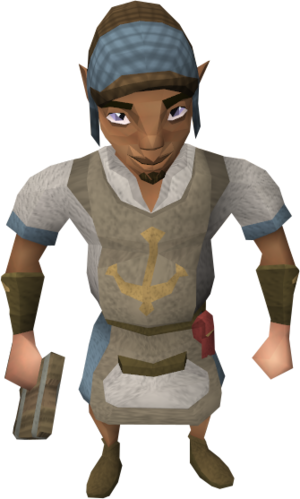 The instability of the position came to light in the year 169 of the Fifth Age, when Glough attempted to start a war between the Gnome Empire and human nations during The Grand Tree quest. Using daconia rocks, Glough attempted to kill the Grand Tree and blame humans for its destruction. An eastern Karamjan Shipyard was found to be manufacturing warships for Glough under the supervision of G.L.O. Caranock, an Officer hoping to benefit from the war. Glough was dismissed by King Narnode, resulting in the promotion of Daero as Chief Tree Guardian.

The Shipyard was eventually decommissioned by the 10th Squad during the Monkey Madness quest, regardless of Caranock's interference. After it became apparent that Caranock was involved in plots to start wars among the Gnome Empire, humanity, and Ape Atoll, the position was re-evaluated by Daero.

Despite Glough's controversial purposes in establishing the title, Gnome Liaison Officers are still used by the Empire today, albeit in their original intended sense. Perhaps because gnome-human relations are far more friendly than they have been in the past, much of the race's diplomacy is now handled by other Empire diplomats. Ambassadors such as Spanfipple and Gimblewap, scientists such as Professor Manglethorp, and scholars and mages such as Professor Imblewyn are now handling diplomatic practices that would once have been overseen solely by Liaison Officers.