Gnome gliders are a useful method of transportation available after completing The Grand Tree quest. The most common way to quickly access them is by teleporting to Al Kharid with a ring of duelling, an amulet of glory, or the lodestone. They can fly to many locations and can be used in combination with spirit trees and the fairy ring network. 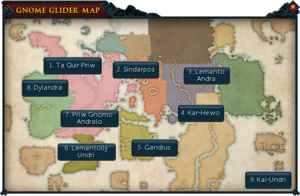 The Glider Network map.
The location of a gnome glider in Karamja

Gnome gliders are located at:

Gnome gliders were first envisioned by Oaknock, the famed gnome engineer and advisor to King Healthorg that was present at the Battle of Atarisundri. Although he made progress in designing rough layouts and models, Oaknock passed away before any true advancements could be made.

His equally talented son, Yewnock, picked up glider design where his father left off. Although little is known of the early testing phases, some gnomish captains today, such as Ninto and Daerkin, were amongst the first to test the gliders. That they survived is an indication of Yewnock's abilities.

Gliders soon became an integral part of gnomish transport and military. Despite their success, initially humans distrusted the devices, as equally as the gnomes disputed the safety of giving humans access to the technology. Made out of only leather, cloth, and wood, it is not until the plot of The Grand Tree quest that they can be used. Gnome Air's success has since spread, leading to the recent construction of gnomecopters.

Recently, gliders butted heads with Ali Morrisane's magic carpet fleet over air rights. They now compete for supremacy. Gnome gliders seem to have the upper hand outside of the Kharidian Desert, as the gliders can reach up to 5 different areas. Gnome gliders can take players almost anywhere.