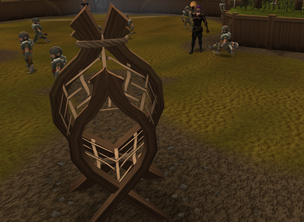 A player shooting the Gnomeball

Gnome Ball is a members-only minigame in which one or more players aim to score goals against gnome ballers. This is done by throwing the gnomeball into the goal. Cheerleaders near the field will root the player on, announcing each goal and winning of the game. Ranged experience is gained each time the ball is thrown, and Ranged and Agility experience when a goal is scored. When players enter the field, they should talk to the gnome ball referee to learn the rules and how to play.

The Gnome Ball field is in the Gnome Stronghold, west of the Grand Tree.

A player tackling another Gnome baller

Gnome Ball has a long history amongst the gnomes, and is a major part of their culture. Many gnomes, such as Speedy Sam The Striker, Great Thunder Legs MacKnee, and Norda 'Steal Arms' van Druman have earned their living as famed Gnome Ball players. Mad Donna and Hugh are also gnome ball players. 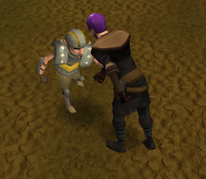 A player unsuccessfully trying to tackle the Gnome baller

A good tactic in Gnome Ball is to pass to a gnome winger from the referee, before running quickly to a spot on the pavement. Remember that the spot directly in front of the gnome goal won't get you hurt by other Gnome Ball players, but this spot is not a very good for scoring a goal. The best place to do this is just a little bit in front of the gnome goal, on the pavement. Another good tactic is to throw it to a gnome winger, then stand on the stone pavement spots close to the fence. There is a slightly higher chance of missing by doing this, but it will increase the distance from which the ball may be thrown.

If players have level 90+ Ranged, simply clicking on the gnome goal after receiving the ball from the referee is the quickest way to score a goal.

Note: Winning multiple games in a row will not result in more than one gnomeball as a reward. To obtain multiple gnomeballs, you must bank each gnomeball (or have someone hold it for you, or use magic/enchanted notepaper) each time you win a game.