From the RuneScape Wiki, the wiki for all things RuneScape
Jump to navigation Jump to search
The Old School RuneScape Wiki also has an article on: osrsw:Gnome (Mourner Headquarters)
GnomeGnome on a rack? (edit)? (edit) 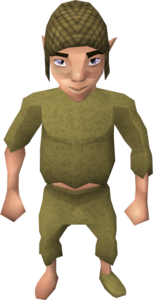 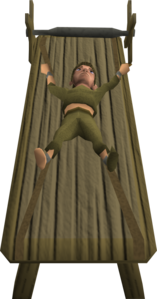 The gnome (real name unknown) is an inventor who is being imprisoned by the Mourners in Mourner Headquarters in West Ardougne.

To create the plague hoax, the Mourners used a fixed device to rupture parcels of paint onto the sheep to make them look plagued. In year 169 of the Fifth Age, the device broke down. Seeing that it was made by gnomes, the Mourners captured a gnome (this one) and demanded to know how to fix the device. The gnome was constantly tortured by the Mourners but refused to give in, as he knew that he would be thrown into the slave pens if he told them how to fix it.

A passing human adventurer, disguised as a new Death Guard recruit, met with the actual Head Mourner, who tasked them to dye the sheep again as the colours began to fade, telling them about the situation with the gnome. The recruit entered the cell the gnome was being held in, who was strapped onto a rack. He refused to give in, but accidentally blurted out that he wanted toad crunchies and couldn't stand his feet being tickled.

The adventurer returned with toad crunchies and a feather, proceeding to tickle the gnome's feet while dangling the toad crunchies above him. The combination of the two caused the gnome's resistance to collapse immediately and he stated that he could repair the device with a piece of soft leather and magic logs. Despite being seen by the guard stationed in the cell and the adventurer on how to repair the device, the gnome was not moved to the slave pens.

The adventurer soon returned to the gnome and asked him to create a diversion to distract the Mourners to sneak to the entrance to the Temple of Light to sing into the Enchanted crystal, so Arianwyn can teleport in without being captured by the Mourners. The gnome reluctantly helped despite being aware that the adventurer could potentially go back on their word and created a ruckus for them.

If the adventurer spoke to the Head Mourner about the gnome, they persuaded him to release the gnome before a thief or curious child could spot him, which would endanger the organization's plans if word spread out. The Head Mourner then proceeded to have him blindfolded out of the headquarters and out of the city. Even if spared, he is not seen after the quest.

If the adventurer failed to speak with the Head Mourner about the gnome, he considered him too much of a risk and had him killed via poisoned toad crunchies.

This information has been compiled as part of the update history project. Some updates may not be included - see here for how to help out!
Retrieved from ‘https://runescape.wiki/w/Gnome_(Mourner_Headquarters)?oldid=35630087’
Categories:
Hidden categories: