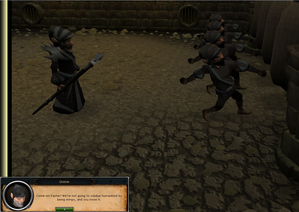 Glouck (known as simply Gnome in-game) is a gnome who was revealed as the ruler of Arposandra during The Prisoner of Glouphrie quest. He appears once in the quest, training a team of gnomes who are able to disappear. His relation to Glouphrie (The founder of Arposandra) is currently unknown, although according to dialogue with Bolrie, it would seem Glouck has overthrown Glouphrie, as he refuses to allow Glouphrie's name to be mentioned within Arposandra, and severely punishes anyone who does.

This information has been compiled as part of the update history project. Some updates may not be included - see here for how to help out!
Retrieved from ‘https://runescape.wiki/w/Gnome_(Glouck)?oldid=35632536’
Categories:
Hidden categories: